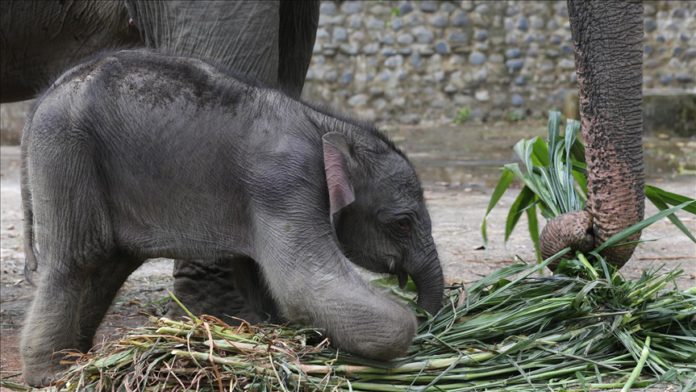 The female calf was born from its 35-year old mother, Sari, and was found by a mahout.

Jefry Susyafrianto, the center’s head, said officers would monitor the elephant calf and its mother.

“Thankfully, the calf and the mother are healthy,” Jefry told Anadolu Agency.

The TNGL Center warmly welcomed the calf’s presence despite concerns about the emergence of a lethal Elephant Endotheliotropic Herpesvirus (EEHV) infection.

EEHV is one of the most fatal, infectious elephant diseases worldwide, killing many young elephants aged one year to 5 years.

A few years ago, Sari gave birth to two calves, but they died after contracting EEHV.

“One of them died in 2013, while the other died in 2015. We are doing everything possible to prevent this from happening again,” said Jefry.

Muhammad Wahyu, founder of the Veterinary Society for Sumatran Wildlife Conservation (Vesswic), confirmed that Sari and the newborn elephant are both healthy.

Vesswic is a non-governmental organization that provides supplies, drugs, and logistics for elephants at the training center.

Since 2013, the Tangkahan Resort Special Animal Training Center has cared for three generations of elephants.

Three calves were born in the first generation but died after contracting EEHV1A, the most common EEHV type.

Meanwhile, three elephants — Christ, Albertina and Europa — were born in the second generation.

However, a few years ago, Europa caught a disease with EEHV-like symptoms and recovered later.

“The laboratory results showed it has tested positive with EEHV, but we could not confirm which type,” said Wahyu.

He explained that there are seven sub-types of EEHV; some are deadly, while others are not.

To date, there is no cure for herpesviruses in animals or humans. Current treatments suppress EEHV and elephants can potentially recover if treatment starts early.

Tangkahan, a home of Sumatran elephants, is widely known as a hidden paradise of Mount Leuser National Park.

There are 11 elephant handlers, often known as mahouts, in the center responsible for feeding, cleaning or bathing, and treating minor medical conditions and training.

The center provides 200 kilograms (152 pounds) of food per day for each elephant.

Sumatran elephants are a protected species under Law No. 5/1990 on Sustainable Natural Resources and Ecosystem Conservation.

The regulation prohibits any form of hunting, trading, or the animal’s possession or parts. Punishment is a fine of IDR200 million ($14,244) or a prison term of at least five years.

Sumatrans elephants are listed as “critically endangered” on the International Union for Conservation of Nature (IUCN) Red List.

Based on 2017 data, there are an estimated 2,000 elephants spread across seven provinces on Sumatra Island, namely Aceh, North Sumatra, Riau, Jambi, South Sumatra, Bengkulu and Lampung.