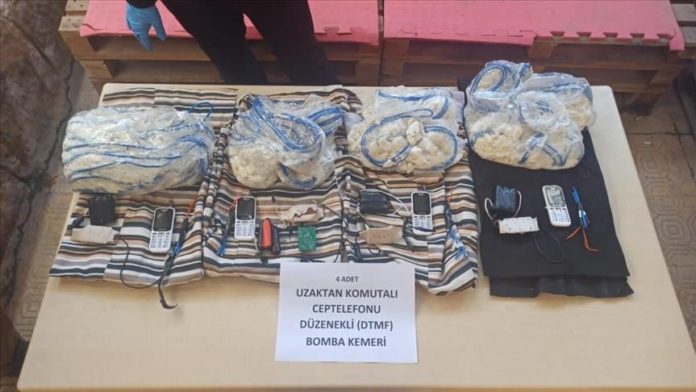 Four terrorists have been caught in the northwestern Syrian town of Afrin, along with suicide vests and kilos of C4 explosives, Turkish police announced on Wednesday.

In a statement, the General Directorate of Security said that intelligence forces of the Syria Task Force in Afrin, working in coordination with police in southern Turkiye’s Hatay province, caught the terrorists affiliated with the YPG, the Syrian branch of the PKK terror group.

The operation concluded in the arrest of the four terrorists, including a woman, and the seizure of 13 kilograms (28.7 pounds) of C4 explosives and four cellphone-controlled suicide vests.

In addition, an individual recording visuals of the Special Operations campus in Afrin for reconnaissance and intelligence purposes was arrested. He later admitted that the photos were shot to be sent to the terror group in exchange for payment.

In its more than 35-year terror campaign against Turkiye, the PKK — listed as a terrorist organization by Turkiye, the US, and EU — has been responsible for the deaths of over 40,000 people, including women, children, and infants. The YPG is the PKK’s Syrian offshoot.