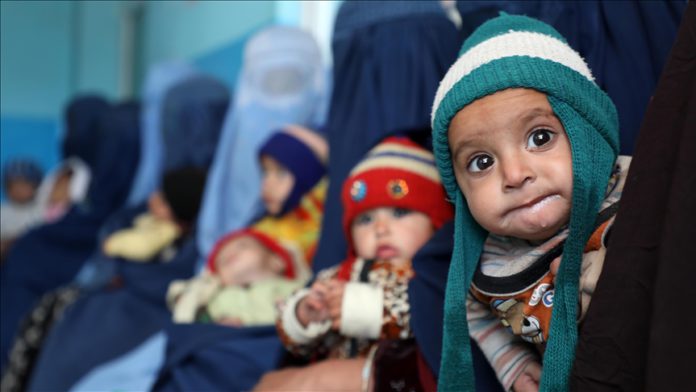 Anadolu Agency has visited malnutrition clinics in Afghanistan’s capital Kabul and witnessed children who cannot crawl or stand despite their age because of extreme hunger in the war-torn country.

The number of malnourished children at clinics is increasing every day.

War, hunger and poverty began to affect children first in Afghanistan where international aid was cut off and the economic crisis deepened following the withdrawal of US forces.

Children suffering from malnutrition are deprived of their most basic right to breast milk.

Unable to reach vital basic foods due to ongoing poverty, most Afghan mothers have dried up their breast milk in a short time.

And the lack of food supplements has caused a visible slowdown in the development of infants and children.

Anadolu Agency met families of suffering children and doctors in the region, where 2- and 3-year-olds in clinics appear much younger, like 8- to 10-month-old babies.

Babies cannot crawl, stand on their feet or walk. They appear to be carrying the weight of the country’s 40-year civil war on their backs.

‘Lucky’ children who found a place in clinics

Twenty-four-month-old Halide is one of the lucky ones who found a place in one of the clinics established by Doctors Worldwide.

Although she is two, she cannot stand on her feet.

Halide, who came to the clinic two weeks ago, should weigh 10-12 kilograms (22-26 pounds) if her development progressed properly. But although she has been in the clinic for two weeks, Halide is just 5.5 kg (12 Ibs).

With the food supplement provided at the clinic, she has gained 500 grams (17.6 ounces) at the end of two weeks.

The prognosis is positive for Halide but she still has not crossed the critical threshold, according to doctors.

“I am very happy that her health is improving day by day,” Halide’s father Azimullah Safe told Anadolu Agency.

Another child being treated at the clinic for two-and-a-half months is 25-month-old Gulsum, who is still unable to walk and has difficulty standing on her feet.

Vefa, a 25-year-old mother whose breast milk dried up because of malnutrition, said she did not eat or drink anything for days except for dry bread and tea.

She said that her family’s economic situation is very bad.

“My milk has dried up for three months. I am feeding my child not with my milk but with dry bread. I do not have milk in my breasts as I cannot feed well,” she said.

1M children at risk of death

According to a statement by UNICEF last October, 3.2 million children under the age of five in Afghanistan suffer from malnutrition and at least 1 million are facing the risk of death.

Save The Children announced on Jan. 19 that the number of malnourished children under clinical follow-up has doubled since August last year.

The number of children under follow-up in clinics, which was 2,886 in August, rose to 4,673 in January this year, according to data Anadolu Agency obtained from Doctors Worldwide.

“Recently, we have observed that the number of patients in the malnutrition clinics has doubled. This shows that the economic situation of the Afghan people is very bad. Most of the mothers who come to the clinics cannot provide their children with breast milk,” said Abbas.

The Taliban regained power in August amid the withdrawal of foreign forces and the collapse of the US-backed government. The interim administration, however, has yet to gain international recognition.

While international funding remains largely suspended, billions of dollars of Afghanistan’s assets abroad, mostly in the US, are frozen.

Half the population faces acute hunger, more than 9 million people have been displaced and millions of children are out of school, according to the UN Office for the Coordination of Humanitarian Affairs.

2 die in floods in southern Italy