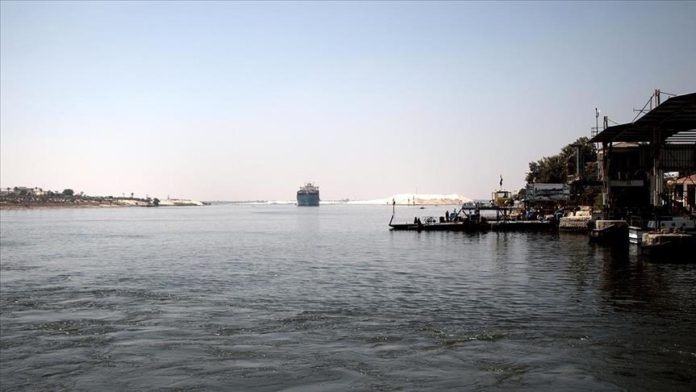 “The navigation movement has returned to regularity again in the canal through the original route and the efforts to rescue and float the giant Panamanian container ship [EVER GIVEN] will continue,” the authority said.

The container ship ran aground while passing through the new channel of the canal on Tuesday morning, the authority said citing “the lack of visibility and bad weather conditions of a dust storm, which led to the loss of the ability to steer the ship.”

Earlier, GAC, a global shipping and logistics company, said a container ship “en route from the Red Sea to the Mediterranean ran aground at KM 151 in the Suez Canal at about 07.40 hours local time this morning [March 23].”

“The vessel suffered a blackout while transiting in a northerly direction,” it added.

Data from worldwide maritime traffic tracker Refinitiv Eikon confirmed that a major crisis occurred earlier on Wednesday in the critical waterway when one of the largest ships in the world turned sideways in the middle of the canal.

Pictures went viral on social media showing more than 15 ships docked in the middle of the canal waiting for the stranded ship to float.

Last year, 18,928 ships crossed the canal with a total load of 1.17 billion tons, “the second-highest load in the history of the canal,” according to data from the Suez Canal Authority.

The canal, considered one of the most important waterways around the world, is the shortest shipping route between Europe and Asia and it is one of the main sources of hard currency for Egypt.

Egypt inaugurated the New Suez Canal, which cost $8 billion, in August 2015 as part of plans to revive the country’s economy and restore Egypt’s position as an important center for trade.