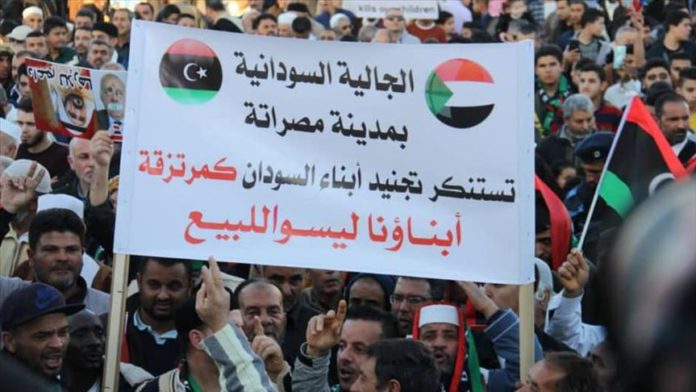 Hundreds of Sudanese staged a rally outside the United Arab Emirates (UAE) Embassy in Khartoum on Tuesday to protest their recruitment to fight for Libyan warlord Khalifa Haftar’s militia.

Protesters demanded “apology and compensation” from the UAE authorities for being deceived by Emirati company “Black Shield Security Services” to fight for Haftar instead of employment.

“We demand an apology from the UAE to the Sudanese people because we are not mercenaries,” Abu Alma’ali Hamza Taha, a protester, told Anadolu Agency.

Ahmad Babakr, another protester, threatened to take the issue to the UN and human rights groups “if the UAE Embassy failed to respond to our demands”.

The Black Shield Security Services has earlier denied accusations of deceiving workers in regards to their contract terms or employment.

The UAE has been accused by the UN and several human rights groups of breaking a UN arms embargo on Libya by sending weapons and mercenaries to fight for Haftar’s militia in Libya.

A UN report in October revealed that thousands of Sudanese fighters were fighting alongside Haftar’s forces in Libya.

Other media reports, including a recent report by the Guardian, also accused the UAE of transporting hundreds of mercenaries to fight in Libya and Yemen.