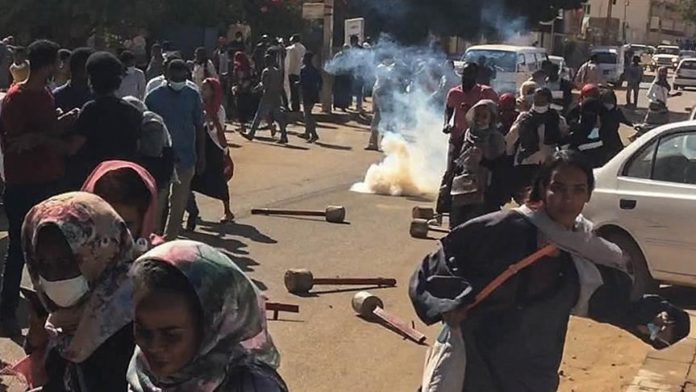 Sudanese police broke up a protest staged by supporters of former President Omar al-Bashir in the capital Khartoum on Sunday, according to a local police source.

Several protesters were arrested by security forces for violating a lockdown imposed by the authorities to stem the spread of coronavirus, the source said on condition of anonymity because he was not authorized to speak to the media.

Sunday’s rally was called by al-Bashir’s supporters to demand his release amid reports that Ahmed Haroun, the chairman of the dissolved ruling party, has been infected with coronavirus in prison.

Sudanese authorities have warned protesters against gathering or violating the lockdown, with security forces deployed in several streets in the capital ahead of the protests.

“The national army has been deployed in some areas in the downtown of Khartoum, closing the main roads that lead to the army headquarters,” Ali Alnimairy, a local resident, told Anadolu Agency.

According to eyewitnesses, hundreds of demonstrators took to the streets in Khartoum and other states to demand the former president’s release.

A source with the United Popular Movement, which is widely believed to be supported by al-Bashir’s former ruling party, said demonstrations have also been staged in the states of Kassala, West Kordofan and South Darfur.

The former president has been sentenced to two years in prison for corruption. He is also facing charges of undermining the constitution over the 1989 military coup he led.

Sudanese authorities have so far confirmed 41 deaths and 593 infections from coronavirus.