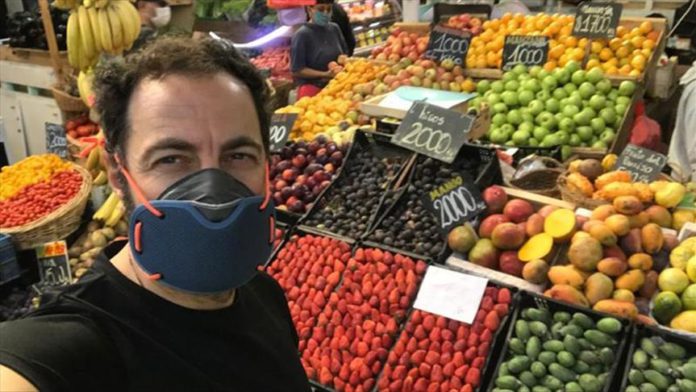 Amid the millions of lives around the world affected by coronavirus, one is a Turkish cyclist in the middle of a world tour, an ocean and nearly 11,000 kilometers (6,835 miles) away from home.

Since 2012 Gurkan Genc has traveled across 50 countries and pedaled over 84,000 km by bike, survived malaria in Africa, and had countless other adventures on the road, but now he is stuck in Chile due to the pandemic and awaiting the reopening of borders to pursue his dream.

“I’m not planning to return to my home country until my tour ends,” Genc, who set off for his world tour eight years ago, told Anadolu Agency.

The 41-year-old cyclist has three continents, 42 countries and at least five years left to finish his tour.

“I have only one life and the world is big,” said the adventurer, based in Ankara, Turkey’s capital.

While traveling the world, “I represent my country and try to be a good person,” he added.

In Colombia, world tour on hold

Genc first heard about the epidemic last December, when he was cycling across Colombia.

Though his bike had suffered irreparable damage when he was heading towards the capital Bogota, he somehow made it to the city.

While he was waiting for a new bike, the epidemic spread everywhere.

“I left all my things in Colombia as my visa had expired and returned to Chile, one of the countries I had crossed by bicycle before,” he said.

“Two days after entering Chile, all the borders were closed, and the country is under quarantine. Now I’m waiting for the borders to open in Chile,” he said.

A devoted budget traveler, Genc usually stays with locals that he found through apps.

But if a vaccine or medicine has not been found, local people might not be as hospitable as they once were, he said.

“This would really push up the accommodation costs for travelers,” he added. “The number of days I stay in a tent will undoubtedly increase.”

Hotels and hostels could also raise prices due to measures to stem the virus’ spread, he said, and countries will step up sterilization procedures.

“Masks also seem set to be a part of our lives for a long time,” he added.

During his travels, he posts his thoughts and memories in Turkish and English at gurkangenc.com.

In the future, he said he would like to join the nation’s Cabinet, asking: “Why not have a Turkish sports minister who has traveled the world by bicycle and seen all cultures?”

“I believe that people who fulfill their dreams can change the future,” he explained.

“I’ve had accidents on the road and survived illnesses, and a lot has happened to me in the last eight years,” he said.

He pedaled through places in Africa where 30,000 people died due to mosquitoes every month and even caught malaria and other ailments.

In 2017, there were 219 million cases of malaria that claimed 435,000 lives, yet most people outside Africa saw the disease as a problem of the continent, he said.

“But today, COVID-19 has affected the whole world,” he said. “We see that we’re looking for a solution to COVID-19 from drugs that have been tried for years in sub-Saharan Africa.”

“COVID-19 was a reminder about death to everyone who was living as if they would never die,” he said.

“I follow the rules in the country I’m in now. I’m in no hurry, I’ll continue my way. Now I’m just waiting for the borders to open.”

When the borders eventually reopen, Genc plans to trek across Central and North America, Alaska, Australia, and South Asia before returning to Turkey.

US: 49 new wildfires contained in California