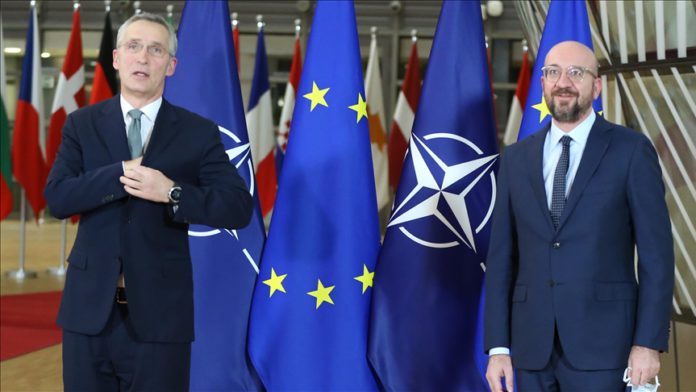 The cooperation between the EU and NATO has been lifted to an unprecedented level over the past, the NATO secretary-general said on Friday.

Jens Stoltenberg spoke at a joint news conference with European Council President Charles Michel ahead of the second day of the EU leaders’ virtual summit.

The NATO chief will participate in the EU heads of state and government discussion about the bloc’s security and defense policy.

“Over the past years, we were able to lift the cooperation between EU and NATO to an unprecedented level,” Stoltenberg pointed out.

He stressed that the military alliance was ready to work with the EU to strengthen resilience and cyber defense capacities, as well as to counter the effects of climate change.

“We will also continue to work on the issues we have worked on for many years, like stabilizing the Western Balkans or tackling migration at Aegean,” he added.

Michel, who presides the conference of EU leaders, also noted that the bloc wants to work with NATO on bringing “more stability and predictability in our neighborhood,” adapting to new threats of disinformation, hybrid and cyber warfare, as well as strengthening industrial and technical capabilities.

After negotiations with Stoltenberg, EU leaders will also discuss the future of the bloc’s relations with the countries of its southern neighborhood — Algeria, Egypt, Israel, Jordan, Lebanon, Libya, Morocco, Palestine, Syria, and Tunisia.