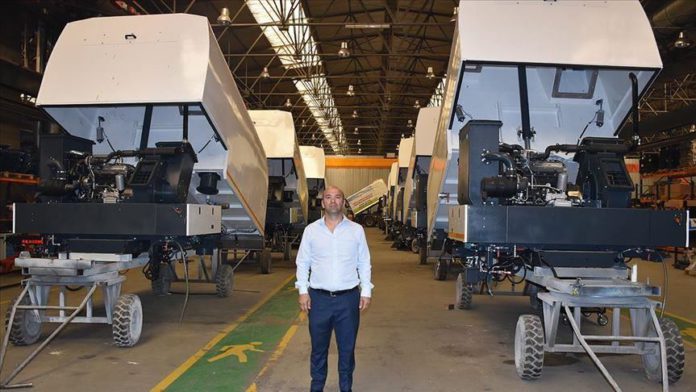 Kenan Celik, General Manager of Kademe Waste Technologies Co., one of the Albayrak Group’s subsidiaries, said the company has had significant successes in exports of the vehicle-mounted Micronsis street disinfection device, saying: “We follow the needs of the world closely and can respond to all the demands as soon as possible. We currently export to 42 countries and aim for 60 countries by the end of this year.”

In this period of increasing demand for street disinfection, thanks to Micronsis, which can be installed on any type of vehicle with a water tank, Kademe helped restore street hygiene, said Celik. He added: “We’re closely monitoring the needs of the world and can respond to all demand as quickly as possible. We currently export to 42 countries and aim for 60 countries by the end of this year.”

Celik said his firm planned to produce an initial 50 units per week of Micronsis — originally dubbed “Anti-corona.” However, because of the increasing orders during the pandemic period, they were forced to expand the capacity of their factory in Konya to up to 150 units per week.

He noted that many municipalities across the country and abroad received numerous orders to disinfect their streets, underlining that the firm’s priority was to meet internal demand.

Demand for street disinfection vehicles had increased with the outbreak, Celik noted. “As the virus has started to emerge in our country, there were many orders for the Micronsis machine that we produced as a result of our research and development department’s efforts.

In the first two months of the pandemic, Kademe had sold nearly 300 units of equipment were sold, with more than 200 of these being exports, he said.

Celik underlined that there had been a decrease in demand as the normalization process began: “This was a process that we envisioned. As the Kademe company, we have developed disinfectant equipment, which is actually not among our standard products, for the public institutions and organizations, who are already our customers, to help them in this distressing process.”

Stressing that Kademe took pride in producing machines, tools and equipment in the fight against the novel coronavirus outbreak, Celik said: “Especially the municipalities that have the most important duty of cleaning the streets indicated that they had received much positive feedback from the citizens when they have begun using Micronsis disinfectant equipment, which we developed in a short period.”

“The municipalities that care about public health showed massive demand for this product of ours. Furthermore, we also followed comments on our product by monitoring the news in both written and visual media. Especially headlines like ‘Anti-virus, Virus Hunter’ on social media sites […] made us so happy.”

Even though demand has lulled for the disinfectant equipment, which Kademe produced as a special product, in the normalization period, their normal output of road sweeping, waste collection and road washing vehicles are still receiving increasing demand, he said.

Clean public areas are increasingly prioritized now compared to before the outbreak, Celik said: “This situation is a positive development for our sector, which produces cleaning vehicles and machines. We, as the Kademe Waste Technologies Co., are going to contribute to both our country and the world by producing ‘Made in Turkey’ goods with low operating costs and of high quality.”

Many injured as police break up protests in Israel's Negev region