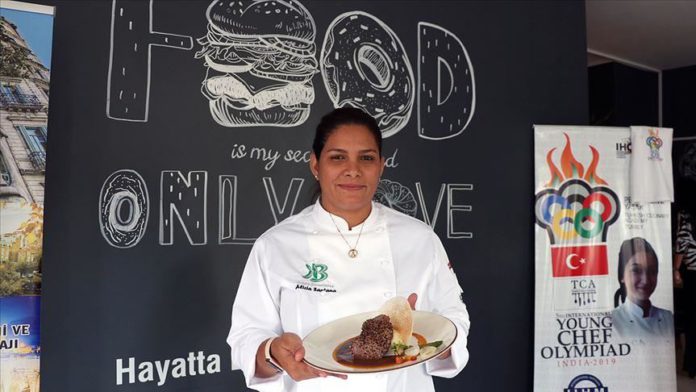 As millions of home-bound social distancers worldwide have turned to online and streaming offerings to stave off boredom amid coronavirus lockdowns, Turkey too has turned to its screen offerings from foreign series to Broadway shows, and from fitness routines to gourmet cooking.

Foreign residents of Turkey’s capital Ankara have gotten the livestreaming cooking bug too.

Marshaling the power of Zoom and Instagram, Alicia Santana, a Dominican chef who has lived in Ankara for nearly a half decade, said the idea of livestreaming international cooking lessons has long been brewing in her mind.

“Since I’m moving from country to country every four or five years, I realized that this is a good way to reach out to the four corners of the world in an easy and fun way,” Santana, 41, told Anadolu Agency.

She said the necessity to self-isolate and quarantine herself for public health – in a break from her usual work with the Turkish Culinary Academy – motivated her to take up the online cooking classes project a few weeks ago.

“I thought that perhaps a way to help the people to alleviate that collective anxiety, from my small space of course, could be to share a little of what I know as a cook and what my friends around the world, as cooks (professionals or not), could also contribute,” Santana said in an email interview.

With the classes free to join, Santana said some 20 people attend per session lasting from one to two hours, springing from countries worldwide including (so far) Turkey, Argentina, France, Israel, Ukraine, Germany, and Colombia.

“We have planned two classes per week, possibly Thursday and Friday,” she said.

So far a septet of cooks from Spain, Italy, Dominican Republic, and Mexico are holding forth at the sessions, she said, adding: “I’m waiting for the approval from four others and am hoping to have some Turkish options as well.”

The online class offerings aim to keep people entertained during lockdown days and avoid exposing them to unnecessary contagions – as well as overly complex recipes.

“The plan is to prepare simple recipes with ingredients that can be easily obtained and can be easily cooked by people who do not necessarily have a lot of experience in the kitchen,” she explained.

But simple certainly does not mean bland or undiversified.

Pointing to the recipes from far-flung locales, Santana underlined that the online sessions offer delicious and healthy food options from various spots around the world.

“I am asking cooks to propose recipes from their countries with these characteristics,” she said.

Santana said these livestreaming cooking sessions will be held at least until people return to regular routines of life, when the time available for these activities will again be more limited.

“People are very interested and excited by the classes,” she said, contagious with nothing but enthusiasm.

“I think that being able to meet up with other people, even through a screen, gives them an idea of group socialization, and that is very necessary at this moment.”

She said high demand during the lockdown spurred them to boost the frequency of online workshops from twice a week to five times now.

Attracting participants from all ages, Yaygir said they range from cafe owners who want to improve their cooking to drum up more business to university students who miss the taste of home cooking.

“Many people living abroad especially from Europe want to learn how to cook traditional Turkish food,” she said.

With the lockdown, people have plenty of time for the almost-weeklong fermentation the crusty bread requires.

For those looking to jump start their ability to make simple, convenient food, Yaygir underlined that after taking just four or five workshops, students can easily cook healthy, delicious meals.

One Ukrainian culinary expert who has offered lessons believes culinary distance learning can inspire an esprit de corps, saying: “I believe we all had a sense of togetherness during the online lesson despite the great distance which divided us.”

Saying that food can unite people, Ievgen Klopotenko stressed that when they cook together, people grow closer to each other.

“Cooking is one of the best remedies nowadays to keep up a good mood and stay positive and healthy,” said Klopotenko, co-owner of the restaurant Sto Rokiv Tomu Vpered (100 Years Back in Future) in Kiev, Ukraine’s capital.

More than 28M vaccine shots administered in Turkey to date