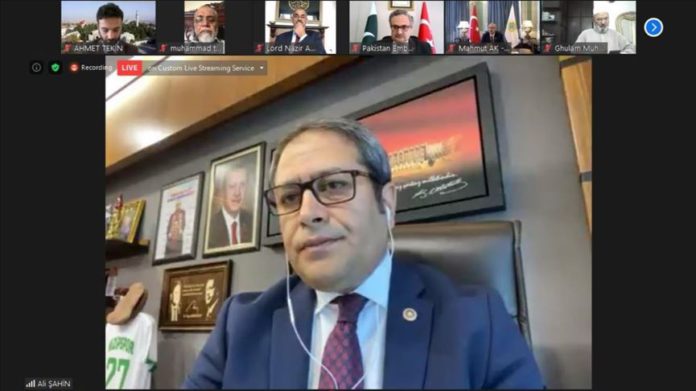 International community must take immediate steps to “stop India from changing demography” in Kashmir which is “at the core of the stability” in the South Asian region, speakers at an international virtual conference said on Monday.

In his address of the conference, Pakistan Federal Minister for Information Shibli Faraz said: “The United Nations must take immediate steps to stop India from changing demography and distinct identity of the Indian-occupied Jammu and Kashmir.”

Fears have risen in Indian-administered Kashmir after India began to grant citizenship to thousands of Indian nationals in disputed Jammu and Kashmir after implementing a new residency law.

Faraz demanded “international community should hold India accountable for the persistent violation of the international law.”

Sardar Masood Khan, the president of Pakistan-administered Kashmir, also known as Azad Jammu and Kashmir, proposed a “Boycotts, Divestment and Sanctions” movement against India over its atrocities in Kashmir.

“As a first step, I have suggested, that the OIC [Organization of Islamic Cooperation] countries, Muslim countries, should ban import of non-halal meat and non-halal products from India,” he told the conference.

Khan urged Turkey to help Kashmiris to establish a “Kashmir Humanitarian Fund” with the support of Islamic Development Bank and Islamic Solidarity Fund.

Turkey’s ruling Justice and Development (AK) Party lawmaker Ali Sahin said the Kashmir issue is at the core of the peace and stability in the South Asian region.

“Most recently, the clashes between India and China have reminded the world how precarious the situation in the region is. Overwhelming majority of the problems that beset the region evolves around the unresolved border issues around Kashmir,” Sahin argued.

He said the United Nations Security Council (UNSC) resolutions numbered 47, 51, 80, 96, 98,122, and 126 decided that the final disposition of the state of Jammu and Kashmir “will be made in accordance with the will of the people expressed through the democratic method of a free and impartial plebiscite conducted under the auspices of the United Nations.”

“But despite Pakistan’s positive and peaceful steps this call was rejected by India many times,” he said.

He said Turkey is of the view that the Kashmir issue should be resolved through dialogue between India and Pakistan on the basis of the relevant UNSC resolutions and in line with the aspirations of the people of Kashmir.

Referring to military lockdown and communications blackout imposed by India in Kashmir after Aug. 5 last year, Sahin said: “Children of Srinagar are the children of Ankara. Women of Kashmir valley are the women of Anatolia. Tears of the Kashmiri mothers are the tears of Turkish mothers.”

“Kashmir is our contemporary Canakkale and Dardanelles. You were with us in Canakkale in those days and we are with you today, there in Kashmir,” he asserted, referring to the Battle of Canakkale, also known as the Battle of Dardanelles, during the World War I.

“Kashmiris’ right to life is routinely violated. There are frequent extra-judicial murders and custodial deaths, more than a 100 Kashmiri youth have been killed this year alone,” he added.

Kashmiri diaspora leader Ghulam Nabi Fai said it was surprising that US President Donald Trump “took India’s ‘no’ to his offer of mediation over Kashmir with Pakistan as answer.”

Trump had offered to mediate between India and Pakistan over Kashmir last year but New Delhi refused.

Urging unity among the Kashmiri diaspora groups, Fai proposed: “We must initiate a global campaign to have the war crimes [tribunal] against Indian leaders.