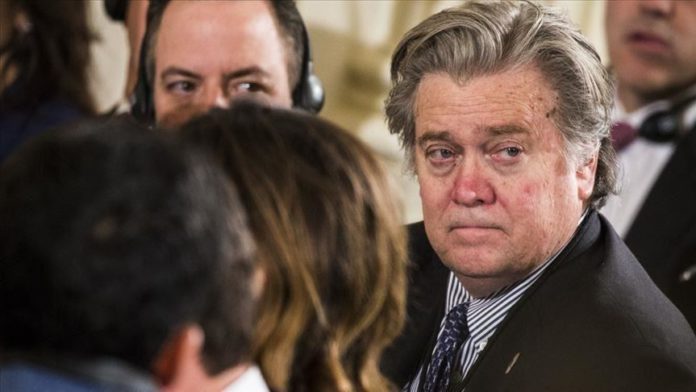 US President Donald Trump’s former chief adviser Steve Bannon pleaded not guilty Thursday to charges of fraud linked to an online fundraising campaign seeking to build a wall at the US-Mexica border.

Bannon and three associates were indicted Thursday in a federal investigation in the Southern District of New York after being charged with defrauding hundreds of thousands of donors through his “We Build the Wall” fundraiser which amassed more than $25 million, the Justice Department said in a statement.

According to the criminal charges, much of the money never made it to the wall.

The founder of the campaign, Brian Kolfage, took $350,000 for personal use and Bannon received more than $1 million through a non-profit organization, at least some of which he used to cover hundreds of thousands of dollars in personal expenses, according to the agency.

“The defendants defrauded hundreds of thousands of donors, capitalizing on their interest in funding a border wall to raise millions of dollars, under the false pretense that all of that money would be spent on construction,” said Acting US Attorney for the Southern District of New York Audrey Strauss.

Bannon was released on a $5 million bond secured by $1.75 million in cash and assets. His travel will be limited to Connecticut and the New York and Washington, D.C. areas.

He is the sixth person linked to the senior leadership of the 2016 Trump campaign to be criminally charged by the Trump-era Justice Department. The others are Roger Stone, Michael Flynn, Rick Gates, Paul Manafort and Michael Cohen.