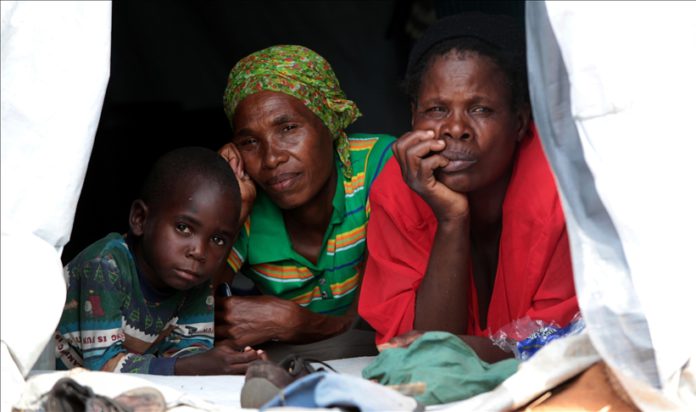 Isiah Guvira, a 42-year-old Zimbabwean of Mozambican origin has worked as a farmer in Lions Den, a town 114 kilometers west of the capital Harare, for his entire life. Since he does not have any official documents, he classified himself as “stateless” because he has neither a local birth certificate nor a national identity card, as does his wife, Berita Siyawaedza, 35, and their three children.

Guvira has recently switched to a more lucrative line of work, illegal gold mining. This is the only field that can fit his situation because earning a wage through the bank or mobile money does not require any kind of identification.

“We all face different kinds of challenges,” Guvira told Anadolu Agency, explaining his concerns and difficulties as a stateless person.

People who are stateless are unable to work, establish a bank account, purchase a home, start a business, or form legally recognized marriages or family unions. In addition, they are impoverished, marginalized, discriminated against, disenfranchised, and politically excluded.

Extremely difficult to get identity card

Obtaining a national identity card is extremely difficult, despite the fact that everything one would need is an official identity, George Itimu, 65, told Anadolu Agency.

After decades of struggle, he finally got a national identity card in 2006, despite the fact that he is a descendant of a Malawian immigrant who was born in Zimbabwe.

“I struggled to get an ID even though I was born in Zimbabwe, but I was stateless for decades because my parents were Malawians.”

“I can say there are hundreds of people living in this area without any (official) identification as they fall into the same category I was before 2006,” Itimu said, holding up his ID, which reads Alien (A), a derogatory term, which he called.

Itimu’s neighbor Beauty Banda is without identification as she was born in Zimbabwe to Malawian parents who died before the government provided them with IDs.

Her life was upended when she dropped out of school in Grade 7. Without a birth document, she was unable to take the Grade 7 examination.

Lions Den is an agricultural community surrounded by commercial farms and abandoned mines such as Shackleton, Alaska, and Mhangura. Officials estimate that at least 4,000 people live in this little town.

According to the UN High Commissioner for Refugees (UNHCR), the Zimbabwean government lacks official data of the exact number of these people known as “statelessness.” However, hundreds of thousands of migrant workers from neighboring countries who were brought in by colonial authorities to work on farms and mines around the country from Malawi, Mozambique, and Zambia, and their descendants who settled or were born in Zimbabwe before independence in 1980 face barriers to acquiring citizenship in the country and have effectively been rendered stateless.

Moreover, generations of ethnic Ndebele people, primarily in the Matebeleland and Midlands provinces, whose relatives were killed or disappeared during the Gukurahundi massacres in the early to mid-1980s, are affected by statelessness, according to the UNHCR’s recent report on these people.

Zimbabwe adopted a new constitution in 2013 and section 43 of the statute offers citizenship to anyone born in the country to parents who are citizens of any Southern African Development Community (SADC) country, including Malawi, Mozambique, Zambia, and South Africa.

The Registrar General office, however, has failed to implement the new citizenship legislation, allowing the discriminatory 1984 Citizenship Act to continue to deny citizenship to the descendants of foreign nationals who came to the country to provide cheap migrant labor.

Those who manage to obtain national identity cards receive cards with the word “alien” printed on them.

Until recently, their lack of an identity card made it difficult for them to get vaccinated during the country’s COVID-19 immunization program.

Human rights organizations have raised concerns about these people who were born in the country but whose status prevented them from receiving vaccinations from public or private health facilities.

Dzikamai Bere, country director of the Zimbabwe Human Rights Association (ZIMRIGHTS), told to Anadolu Agency that it was discrimination against these people.

The government released a statement on July 15 directing all immunization centers to deliver COVID-19 vaccine to citizens without identity, following a public uproar in support of “stateless” people.

“All those who present themselves for vaccination without National Identity Cards or passports shall be vaccinated upon production of a letter from a Headman, Local Councilor, or Member of Parliament confirming their status as ordinary residents in the area,” said Air Commodore, Dr. Jasper Chimedza, secretary for Health and Child Care.

The Guvira family and many others of Lions Den town had gone to the town’s public health center to receive a COVID-19 vaccine, but they were unable to do so since a national identity card was required to compile statistics on people who had been immunized.

“My wife and I went to the local clinic to get vaccinated against COVID-19, but we were informed we needed a national identity card to get inoculated,” Guvira told Anadolu Agency, adding that he at the time “felt discriminated, rejected, as if I am not human enough to benefit from health services.”

Guvira’s family and hundreds of thousands of others will benefit from the government’s recent decision to immunize against the deadly virus.