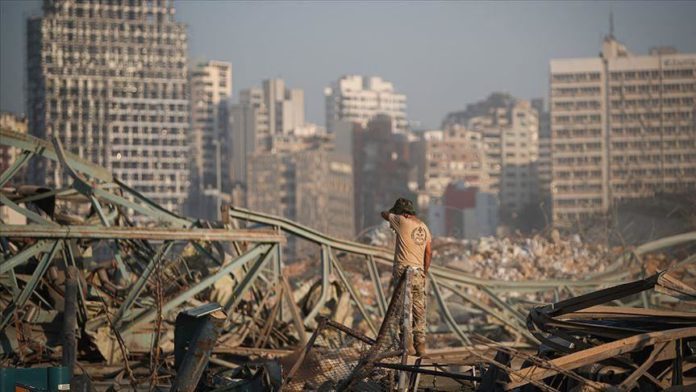 After the devastating port explosion earlier this month, NGOs have been working tirelessly to revive Beirut, with armies of volunteers flooding the blast-hit streets to do what is needed to heal the city’s people.

On Aug. 4, the explosion of a warehouse in the Lebanese capital filled with nearly 3,000 tons of ammonium nitrate took at least 200 lives, also leaving around 6,000 injured and 300,000 people homeless.

Amid political uncertainty and growing public anger against the government, NGOs, at least for now, have been focusing one basic task, namely saving human lives.

Coming from all corners of Lebanon, thousands of volunteers are striving to help the areas hardest hit by the explosion, distributing food, clean water, and COVID-19 protection supplies to the most vulnerable.

“We don’t really care about the damage to buildings but the harm done to people,” said Sara Abi Kanaan, a well-known local actress.

After the horrific blast, she joined the civilians working to dig Beirut out of the wreckage, volunteering for the most vulnerable in society.

Coordinating with local bodies and communities, she said the volunteers now have a mission of rescuing society.

“The only hope is us being and standing together,” she stressed, adding that all Lebanese feel traumatized but now is the time to show resistance and resilience.

Marwad Atasi, the founder of a medical initiative established right after the blast, said they are continuing to treat the injured.

Explaining they turned the warehouse of a building into a clinic, she said the solidarity of the Lebanese is the only thing giving them hope at the moment.

“We started with 10 volunteers and now we are continuing our work with more than 50.

“We never intend to be dependent on the state here. We will continue to heal our own wounds,” she stressed.

Mohammed Al- Elani, a volunteer engineer assessing buildings damaged by the explosion, told Anadolu Agency that they are doing their best to get the city up and running again for the good of the people.

“We have been checking the state of the buildings hit by the blast, especially historical and religious places. Almost all the buildings have broken windows,” he said.

In a tent at the entrance of the neighborhood of Mar Mikhael, simple medical aid is provided to the injured in the form of first aid, stitches for cuts, and various medicines.

Linda, one of the ad hoc medical tent’s organizers, said that due to the dimensions of the blast, people were exposed to many sharp objects and ended up lacerated with deep cuts.

“I am very happy that politics is not spoken in this tent. The only thing that matters here is people,” she said.

“Lebanese are helping each other. I don’t know any of them by their surnames, I know them all by name. This is what I want,” she explained.

In the aftermath of the blast, local NGOs have perhaps become more reliable and effective than the government, increasingly sophisticated, spreading throughout the streets, each looking after a certain area so the trauma could be managed properly.

Lebanon’s civil society is working to forge a different country, the country they dream of, with a better community, justice, opportunities, and social interaction.