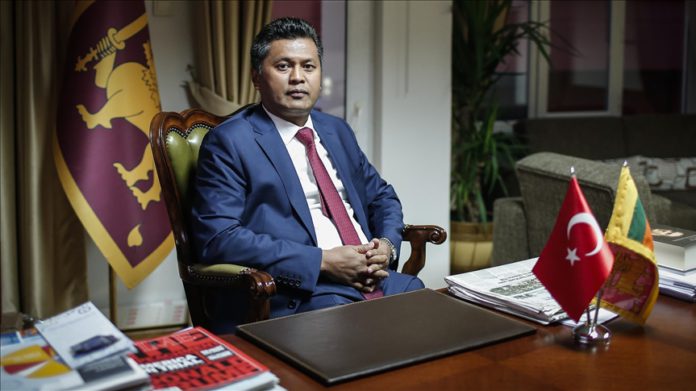 Now in their 73rd year of diplomatic relations, Sri Lanka and Turkey are set to see many more positive developments in wide-spanning cooperation, as well as areas like tourism and aviation in the coming period, according to the South Asian nation’s envoy in Ankara.

“Sri Lankans always admire friendship of Turkey as a true friend and Turkey stood by Sri Lankans when in trouble and difficulties,” Mohamed Rizvi Hassen said in an interview with Anadolu Agency ahead of the country’s 73rd Independence Day celebration.

Citing Ankara’s immediate response and support to his country during and after a devasting tsunami in 2004, Hassen expressed Sri Lanka’s “gratefulness for medical donations, including ventilators,” sent recently from Turkey to be used in the fight against the novel coronavirus.

According to the Turkish Statistical Institute, bilateral trade peaked between the two countries in 2018, rising to a volume of $220 million.

Turkey became the top importer of Sri Lankan tea in 2017, according to official data from Ankara. Moreover, the latest figures from Sri Lanka’s Export Development Board indicate that Turkey was among the top ten export markets for Sri Lankan products in 2020 despite the pandemic, which the ambassador described as a “remarkable gain” for his country.

“The people in Turkey know about tea, the Ceylon tea, but we have many others. We have the best cinnamon in the world. Ceylon cinnamon is indigenous to Sri Lanka.”

Vowing to conduct “aggressive marketing” of his country’s products, Hassen noted a campaign and action plan by the embassy “to increase tourism, investment, cultural ties, people-to-people contacts, and the trade volume in upcoming years” to benefit people and businesses in both countries.

Numerous sectors will be discussed in the next session of the Sri Lanka-Turkey Joint Commission for Economic and Technical Cooperation to be held in March or April this year in Colombo city, Hassen added.

This joint commission will talk about economic, cultural and technical cooperation, as well as tourism and establishing aviation links between the two countries.

He noted that there may be visits at the foreign minister level from both countries following the joint economic commission meeting.

The island nation is expected to send a high-profile delegation to attend the International Defense Industry Fair to be held in Istanbul in May.

“It will create cooperation among the defense sector,” Hassen said.

From 2014 to 2019, Sri Lanka attracted a total of $7 billion in foreign direct investment.

“However, it is unfortunate to observe no prominent Turkish investors on the list and investment from Turkey in Sri Lanka merely $3 million,” the ambassador asserted.

Inviting more Turkish investment in the construction sector, he said efforts are ongoing “towards attracting and motivating Turkish top companies or business entities” to go to Sri Lanka.

The country’s Board of Investment is readily available to provide incentives and assist Turkish investors to set up their operations, Hassen added.

Sri Lanka is ready to become Turkey’s gateway to the Asia-Pacific markets, Hassen said, adding: “Despite this COVID-19 situation, we continue to meet either personally or virtually to introduce businesspeople, as well as the business potential, of my country.”

In particular, he said Sri Lanka welcomes Turkish investment and participation in developing the country’s ports.

“We’re hopeful for this year,” he said, with meetings being arranged between both sides’ trade chambers and business people amid efforts that he said are “going positively.”

Besides economic links, both countries have good people-to-people relations, too, he said, mentioning that many Sri Lankan tourists traveled to Turkey before the pandemic.

Sri Lanka recently ended its long closure to foreign tourists, whom it has started accepting into the country once again since Jan. 21.

He also noted that flights between Istanbul and Colombo by Turkey’s flag carrier, Turkish Airlines, have “given a boost” to connections between the two countries’ people.

Underlining the popularity of Turkish soap operas among Sri Lankans, he said there were currently four Turkish TV series, including “Kadin and Hercai”, aired by the most popular broadcasters in his country.

“Sri Lankans have been given an opportunity to witness a glimpse of Turkish culture and the beauty through quality television series shown on Sri Lanka’s main television stations,” Hassen said, adding that these series are “very popular among Sri Lankan folks.”

“Sri Lanka is determined to utilize the potential that Turkey provides,” he vowed.