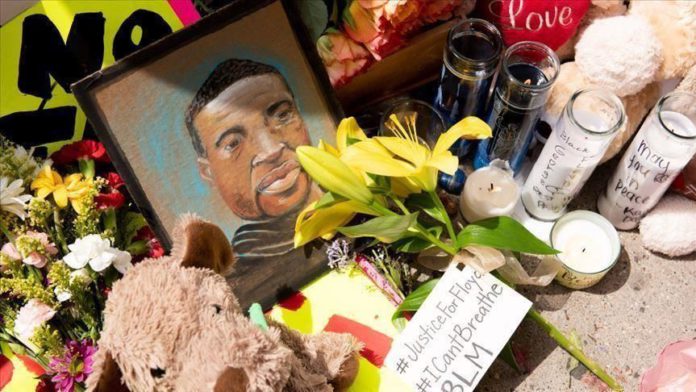 Sports figures expressed solidarity this week with protesters over the death of George Floyd, an unarmed black man who died last Monday in the US state of Minnesota after being pinned down by a white police officer.

Kylian Mbappe, who helped France win the 2018 World Cup against Croatia, showed his support for Floyd on social media.

The 21-year-old football player shared the #JusticeForFloyd hashtag on Twitter and it has been retweeted by thousands of users.

NBA champion and Ex-San Antonio Spurs forward Stephen Jackson, who was a close friend of Floyd, referred to him as his “twin” on his Instagram account.

“Twin. I promise I won’t let this BS ride. Already talked to @shaunking. Anybody from Houston/Cuney Homes u know this was my brother. Can’t let this ride. All hands on deck. Rest Easy Twin. #3rd,” he said.

At a Bundesliga match in Germany, English midfielder Jadon Sancho and Moroccan defender Achraf Hakimi scored goals for Dortmund and removed their jerseys to reveal a hand-drawn “Justice for George Floyd” statement on their undershirts.

Schalke 04’s US midfielder Weston McKennie wore a “Justice for George Floyd” armband in the team’s match against Werder Bremen.

“To be able to use my platform to bring attention to a problem that has been going on too long feels good!!! We have to stand up for what we believe in and I believe that it is time that we are heard! #justiceforgeorgefloyd #saynotoracism,” McKennie said on Twitter.

“I really don’t know how to put into words exactly how I feel, but one thing I know for sure is that enough is enough.”

“Enough is Enough. It’s going to take everyone to help this system change. No matter your color or attributes, We are all human, who know what’s right deep down. Making a real change will be Justice for Floyd & everyone who came before him. Let’s all be a part of the change,” he said on Twitter.

– Kneeling during US national anthem

Since then, he has been at the center of player protests seeking to draw attention to injustices experienced by the black community in the US.

One of the officers, Derek Chauvin, kneeled on his neck, despite Floyd’s repeated pleas of “I can’t breathe.”

Minneapolis Mayor Jacob Frey fired Chauvin and the three other officers who took part in Floyd’s arrest a day after a video of the incident went viral on social media.

Epstein guards say they are victims of broken US system