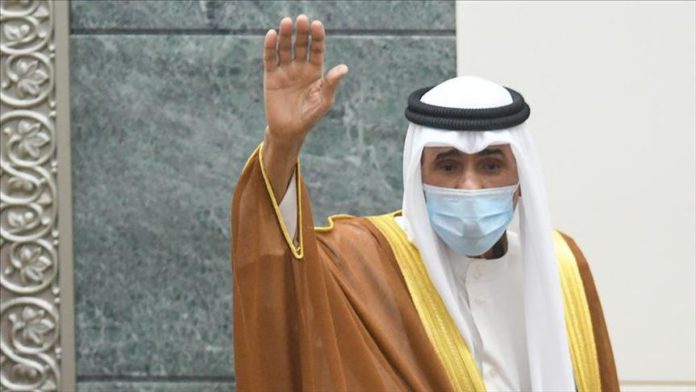 With Sheikh Nawaf Al-Ahmad Al-Jaber Al-Sabah sworn in as the new emir of Kuwait, questions surfaced over the upcoming royal family’s member to become the crown prince.

The new emir succeeded on Wednesday Sheikh Sabah Al-Ahmad Al-Jaber Al-Sabah, who died at age of 91 while receiving treatment in the US.

The Kuwaiti constitution gives the new 83-year-old emir a one-year period to choose his crown prince, according to Article 4 of the constitution.

If the emir does not name a new crown prince as stipulated in the article, he recommends three personalities from the royal family and propose them to the National Assembly to choose one.

Sheikh Mashael Al-Ahmad Al-Sabah, 80, the half-brother of the new emir, is the most potential figure to become the new crown prince.

He is characterized by his strict personality, and is considered the most potential figure for the position, although he has been far from the political circles in the country.

Mashael Al-Ahmad Al-Sabah used to accompany the late emir during all his medical trips, including his recent trip to the US.

The second potential figure is Mohammad Sabah Al-Salem Al-Sabah, 64, a candidate for the Al-Sawalem branch, who used to rotate with the Al-Ahmad branch over ruling Kuwait since its independence in 1962, before the late emir broke the customary habit by appointing Sheikh Nawaf from the Al-Ahmad branch as crown prince.

Mohammad Al-Sabah is the fourth son of Sheikh Sabah Al-Salem Al-Sabah, the 12th emir of Kuwait, who ruled the country from 1965 to 1977.

He held the positions including deputy prime minister and minister of foreign affairs, before he resigned from the two positions in 2011.

He is also an academic and holds doctorate degree in mathematics and is known for good reputation and fighting corruption. The Al-Sawalem family branch hopes to return to the Kuwaiti ruling house through him, but his chance is less than that of Sheikh Mashael.

Sheikh Nasser Mohammed Ahmad Al-Jaber Al-Sabah, 72, is the son of the late emir. He comes third after the first two figures, as he held the position of the first deputy prime minister and minister of defense in the last government of Jaber Mubarak Al-Sabah.

He also enjoys wide popular acceptance, as he is the first fighter of corruption in Kuwait, and he blew his biggest case in what is known as the Army Fund, the case which overthrew former Prime Minister Sheikh Jaber Mubarak Al-Sabah and former Interior Minister Khaled Jarrah Al-Sabah.

But Sheikh Nasser Al-Sabah’s health conditions may make his chance for the position relatively lower, as he suffers from a lung tumor that was successfully removed by surgery in Germany two years ago.

He also received Legion of Merit from US President Donald Trump on behalf of his ailing father last month, a move that was seen by observers as an indication of his chances of assuming the position.

Trump awarded the Legion of Merit with the rank of commander in chief to the former emir for his mediating role in resolving conflicts and overcoming divisions in the Middle East.

The former candidates are the luckiest, according to the current speculation, but this does not totally eliminate chances for other figures including former Prime Minister Sheikh Nasser Al-Muhammad Al-Sabah, who moved away from the political center nine years ago after his resignation from his post due to growing opposition against him.

Nasser Al-Muhammad, 79, is the second son of Sheikh Muhammad Al-Ahmad Al-Jaber Al-Sabah, and nephew of the current emir.

Also, Sheikh Ahmed Al-Fahd Al-Sabah, has great influence in sports and ambitious to reach power. He is not absent from the scene, but his chance is lower under current circumstance.