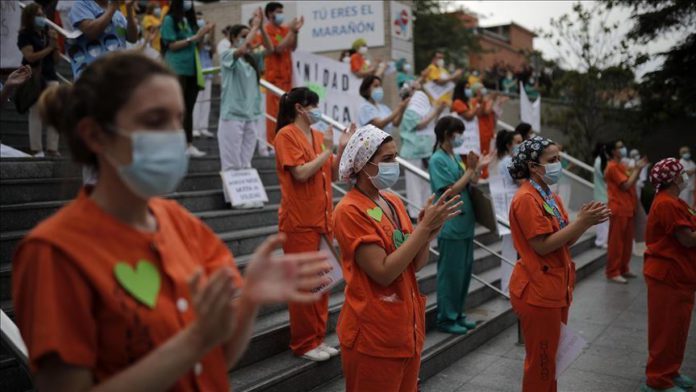 Spain saw another jump in the number of coronavirus cases over the weekend, with the Health Ministry reporting 6,361 cases – nearly 50% more compared to previous weekend.

Over the last week, more than 12,800 people tested positive for the disease in Spain, the highest weekly infection rate in months.

The worst outbreaks, according to Fernando Simon, Spain’s chief epidemiologist, remain in the northeastern regions of Catalonia and Aragon.

In a news conference on Monday, Catalan President Quim Torra said the region is “facing the 10 most important days of the summer, when we’ll find out whether […] we can slow down this critical situation. Because if we don’t, we’ll have to go back to [stricter measures.]”

Over the weekend, bars and restaurants were ordered to close at midnight and dancing indoors was prohibited across Catalonia. Residents of several areas of the region, including Barcelona, have been asked to stay home.

Officials in the region of Murcia also said if outbreaks are not controlled within the next two to three days, localized lockdowns would be enforced in various urban centers.

The Basque Country also announced on Monday that bars and restaurants will have to close by 1:30 a.m. local time (2330GMT).

“In many situations, we’ve been letting our guard down,” said Simon in a news conference, referring to social settings like parties, nightclubs and family gatherings.

On Monday, both the Spanish tourism industry and British visitors continued to reel from the surprise announcement this weekend that all arrivals from Spain to the UK would have to quarantine for two weeks.

The Spanish tourism minister insisted on Monday that the government is in talks with the UK, pushing for exemption for people visiting Balearic and Canary Islands, which have lower incidences of COVID-19 than the UK.

The presidents of Andalusia and Valencia told local media on Monday they hope the UK will reconsider the forced quarantine on arrivals from their regions as well.

The UK is the number one source market for tourists to Spain and the top spenders. According to the National Institute of Statistics, last year British visitors spent nearly €18 billion ($21.15) in Spain.