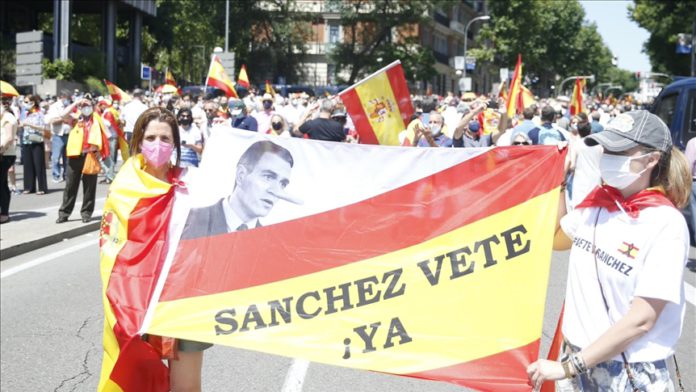 Speaking to an audience at the historic Liceu Theater in Barcelona, Sanchez said he will bring his proposal to a Cabinet meeting on Tuesday, where it is set to pass.

The pardons apply to Catalan politicians and activists who were behind the failed 2017 independence attempt and illegal referendum. They have been condemned to up to 13 years in prison.

“If there’s a time to unite, it’s now. This is where we should start the journey toward living together harmoniously and in normality,” he said. “The landscape of the pandemic has transformed us. We realize what’s really important is life. We realized how much we need each other.”

His announcement, however, was not enough to satisfy all Catalan separatist activists. Hundreds picketed the event, saying that pardons do not go far enough. They are demanding amnesty for the political leaders, including those who fled the country and an independence referendum.

Outside independence circles, the pardons are also unpopular. According to a poll conducted for El Mundo newspaper, 61% of Spaniards are against pardoning the Catalan independence leaders.

But Sanchez insisted that the move will offer a fresh start for Spain and Catalonia after years of tension. He also defended the legality of the pardons.

“This is a new project for Spain, a new space free of the mistakes of the past. We should stop trying to divide each other, and I am convinced that this is the grand consensus of the Catalan and Spanish people.”

He gave no hint of offering an independence referendum or changing the Constitution to allow one.

“I cannot conceive of Spain without Catalonia, or Catalonia without Spain,” he said.