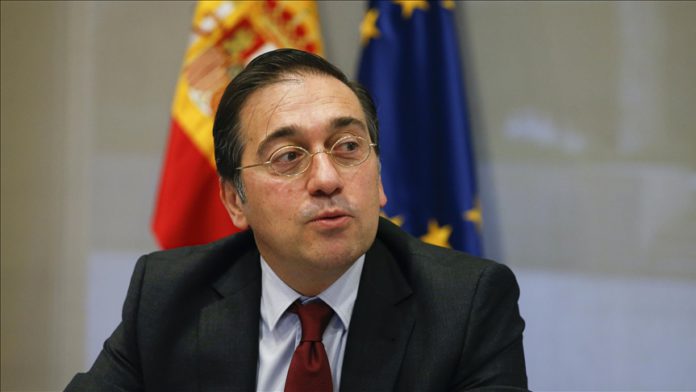 Spain’s foreign minister said on Monday that bilateral ties with Turkiye continued to grow as their economic and social relations scaled up over the past two decades.

Speaking at a press conference in the capital Madrid, Jose Manuel Albares referred to a bilateral summit held in December in which the two sides emphasized their “comprehensive partnership.”

This summit was not a sudden step forward, but a continuation of the relations already in place, said Albares.

The minister underlined that both countries shared a variety of similarities as they were part of the common region of the Mediterranean, while also being NATO allies and co-founders of the UN Alliance of Civilizations.

He further noted that the interest of Spanish companies towards Turkiye has grown and that Spanish investments there had increased over ten-fold over the past two decades, while their peoples had gotten closer in the process.

Crisis between Russia and Ukraine

Albares underlined the need for de-escalation on the Ukraine-Russia border and the continuation of dialogue, stressing that military conflict could be avoided.

He also said that the EU had been built as a means of conflict resolution to prevent war and military escalation, which would be a huge step back for Europe.

Russia recently amassed more than 100,000 troops near Ukraine, prompting fears that the Kremlin could be planning another military offensive against its ex-Soviet neighbor.

The Kremlin also issued a list of security demands from the West, including a rolling back of troop deployment to some ex-Soviet states, and guarantees that Ukraine and Georgia will not join NATO.

Last month, NATO Secretary-General Jens Stoltenberg said that allies are ready to meet with Russia to address issues raised by Moscow, but also underlined that NATO “will not compromise on the fundamental principles on which Euro-Atlantic security rests.”

Albares also commented on Spanish-Moroccan relations, which have been hit by the issue of Western Sahara separatism and irregular migration.

He said Morocco was a strategic partner of not only Spain but also the EU, and that their cooperation prevented the arrival of scores of irregular migrants to Ceuta and Melilla during Christmas.

The foreign minister further noted that Spain, the EU, and Morocco had common interests and that all sides could gain through their strategic partnership.

The high-level dialogue between Spain and Morocco still continues despite Rabat withdrawing its ambassador from Madrid on May 18, 2021, according to the minister.

This spat between the two Mediterranean neighbors has been marked by historically high diplomatic tensions.

In May, Spanish authorities allowed Western Sahara separatist leader Brahim Ghali to be treated for COVID-19 in Spain, infuriating Morocco.

As a response, Moroccan border police watched passively as more than 10,000 migrants poured into Spain’s north African enclave of Ceuta.