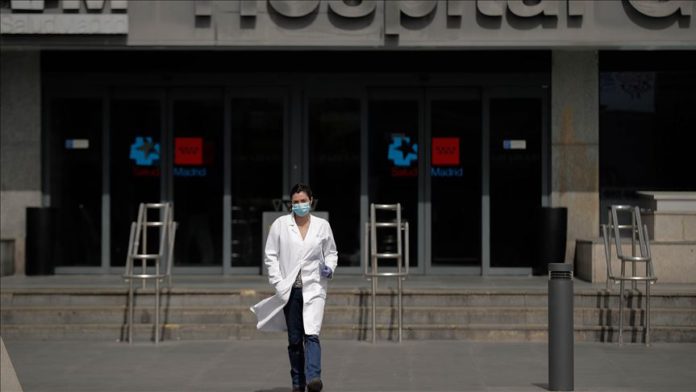 As Spain confirmed rising infections for a second day in a row on Wednesday, the country’s healthcare workers were decorated with the 2020 Princess of Asturias Award for Concord.

The Ministry of Health confirmed that 240,300 people have now been infected by the virus in Spain — up nearly 400 from Tuesday, when 219 people tested positive compared to 137 on Monday and 71 on Sunday.

The Health Ministry also raised the total death toll by one to 27,128. This is the first new death counted this week.

However, that figure starkly contrasts with information coming out of various Spanish regions. For instance, Catalonia on Wednesday confirmed 34 more deaths and the Basque Country confirmed an additional 10.

Meanwhile, Spain’s frontline healthcare workers on Wednesday won the prestigious Princess of Asturias Award for Concord. The award is comparable to the Nobel Peace Prize of the Spanish-speaking world.

More than 50,000 of Spain’s healthcare workers have been infected with COVID-19 and at least 60 have lost their lives.

“The efforts of Spanish health workers against COVID-19 have allowed infected patients and fatalities to be attended to. They’ve carried out, beyond their obligations, work of profound humanity when accompanying hospitalized patients and individuals whose relatives could not be present in their final hours of life,” said the press release from the Princess of Asturias Awards.

While some doctors and nurses embraced the award, others decried it as empty symbolism.

“It’s a gesture, but I don’t want gestures, I want to hear that they will improve the healthcare situation in this country,” tweeted Dr. Elena Casado Pineda. “This is like the premium version of the nightly applause, it serves for exactly the same thing.”

The pandemic has killed over 382,000 people worldwide, with more than 6.43 million confirmed cases, while recoveries have surpassed 2.76 million, according to figures compiled by the Johns Hopkins University of the US.