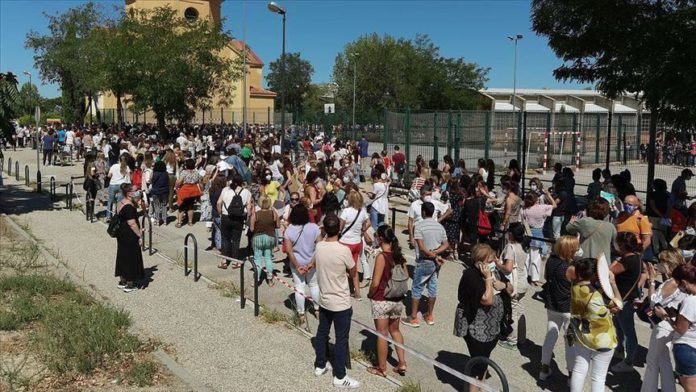 After most of the tourists cleared out by the first week of September, the charming coastal town of Santoña in northern Spain had a problem.

Authorities detected 64 active coronavirus cases in the town of 11,000 – around one out of every 171 residents was thought to be infectious.

Unlike most other areas of Spain with such a high infection rate, officials acted fast to contain the spread. On Sept. 2, the region was placed under a 14-day lockdown – bars, restaurants and hotels closed. No one was allowed to leave or enter the area for non-essential reasons.

But not even a week after the town was locked down, primary and pre-schools opened their doors for the first time since March.

“The whole situation is frightening. There are two ways to enter the town —one has a concrete road block and the police are permanently at the other, stopping everyone who leaves and enters the town. It’s like something out of a movie,” Davide Lacasella, the father of three school-aged children in the region, told Anadolu Agency.

“If things are so bad, why would the government want us to send our kids to school?”

Although Santoña’s schools opened on Monday, turnout on the first day was dismal. Out of 805 registered students, only around 30 showed up. Lacasella joined the majority and kept his children at home.

Parents who keep their children at home on a consistent basis risk breaking Spanish law, which requires everyone between the ages of six and 16 to attend classes. In Lacasella’s case, homeschooling or online classes were not options.

“My wife is a teacher, and I know there aren’t many safety measures. The windows don’t open all the way, the buildings are old and the classrooms are small. Everything was organized last-minute. My parents have respiratory problems…It’s such a difficult situation. I don’t know what to do,” he said.

Though Santoña is an extreme example, it illustrates Spain’s enthusiastic push to get students back into physical classrooms despite having one of the highest known rates of COVID-19 infections in the world.

‘Schools will be safer’

Over the last two weeks, Spain has confirmed more than 110,000 new SARS-CoV-2 infections. On a per-capita basis, daily detected infections are higher in Spain than other hard-hit countries like the United States, Brazil or Peru.

Yet in most South American countries, schools generally remain closed and education has moved to the internet, televisions and radios. In the US, hundreds of schools have reopened their doors, but many places, including most large cities, are instead opting for online education, at least until infection rates fall.

In Spain, while the power is in the hands of the regional governments, almost every school is set to open its physical doors to students this month – from pre-schools to universities.

When asked last week if the return to school would be safe, Spanish Prime Minister Pedro Sanchez said “yes” without hesitation.

“Zero risk doesn’t exist in terms of epidemiology, but there is one risk we can remove – the risk of social exclusion due to unequal learning environments,” he told the radio station SER.

“I believe parents, children and teachers can be sure they will be much safer in schools than in other places.”

The measures to make Spanish schools safe vary slightly within each region. As a rule, all students must wash their hands frequently, and those over six will wear masks. Mixing between classes or groups is discouraged and class sizes are slightly smaller. Likewise, schools have been told to ramp up ventilation and disinfecting measures.

Some high schools and universities are opting for a blended learning approach, where some classes are in-person and others are online. But with a few exceptions, full distance learning options do not exist in educational centers that weren’t already online-only.

Until there is a scenario of “uncontrolled transmission”– a threshold which has not been defined – students will be obliged to go to school, although individual classes and groups could be forced into confinement in the case of infections.

“The reality is this virus spreads easily. Opening up without control is a recipe for disaster,” said World Health Organization (WHO) Director-General Tedros Adhanom Ghebreyesus last week in a press conference.

“If schools are reopened in areas with high levels of community transmission, major outbreaks are inevitable and deaths will occur in the community as a result,” said Zoë Hyde, an epidemiologist at the University of Western Australia in Perth in a paper published in the science journal Nature.

The WHO suggests that a country cannot consider the coronavirus under control until less than 5% of tests come back positive. In Spain, the rate of positive PCR tests is around 11%, Spain’s chief epidemiologist Fernando Simon said Monday.

“In a way, Spain’s return to schools is a big experiment. Perhaps we’ve rushed and it would have been wiser to wait. I’m not saying forever. I want to see children back in school, but the worst scenario is we reopen too soon and then have to close because of too many outbreaks,” Dr. Daniel Lopez Acuña, former director of the WHO’s Health Action in Crises Recovery and Transition Programmes and professor of the Andalusian School of Public Health, told Anadolu Agency.

He insisted that viral spread in Spain is not homogenous and risk should be considered based on the density of viral spread in the community, which is particularly acute in the regions of Madrid, La Rioja, the Basque Country and Navarra but picking up across the country.

“In places with very high incidence, the measures, like masks, may not be enough.”

Although Spain’s plan to return to the classroom is sold by the government as not only safe but the only way to achieve social equality, others suggest that it is the result of poor planning.

The Ministry of Education crafted the bulk of the back-to-school guidelines in June, when Spain had managed to push down the infection rates to an exemplary low level after months of strict lockdown.

“The Ministry of Education and regional governments have been planning for a scenario that was totally unrealistic. By the end of August, the issues of high rates of infection were obvious. But the problem is, the beginning of September is too late for any reasonable and professional planning of an academic year,” said Fernando Trujillo, a professor of language education at the University of Granada, who led a study on education in Spain during the pandemic.

Educational guidelines were updated on Aug. 27, when leaders reconvened after summer holidays, but most of the fundamentals remained the same.

Despite an influx of money for pandemic response in schools, Spain has not recovered consistent investment in education to pre-financial crisis levels, according to the latest data from 2018. Trujillo suggested this has only exacerbated problems in terms of hiring more teachers, purchasing digital devices and reducing class sizes.

According to Trujillo, the last-minute planning for the scenario of high infection rates has been a major source of stress for the educational community.

“Without instructions and norms, we can’t adjust the other issues like building timetables or curriculum design. This lack of planning has provoked the worst emotional situation for parents and teachers that we could have had – teachers are totally depressed and parents are totally worried.”

Trujillo said the worst problems related to the digital gap, which caused many disadvantaged students in Spain to fall behind during online classes last spring, could have been addressed but were mainly ignored due to the determination to return to business-as-usual with some extra safety measures.

“The pandemic could have been a real turning point for Spanish education… Some regional governments have worked to improve, but others just seem like they’re waiting for a miracle or even want it to get bad so they can point their fingers at the central government,” said Trujillo.

“Education and politics may be complex, but viruses are rather simple – if you give them the opportunity to replicate because you open schools and bars, that’s exactly what they’ll do.”