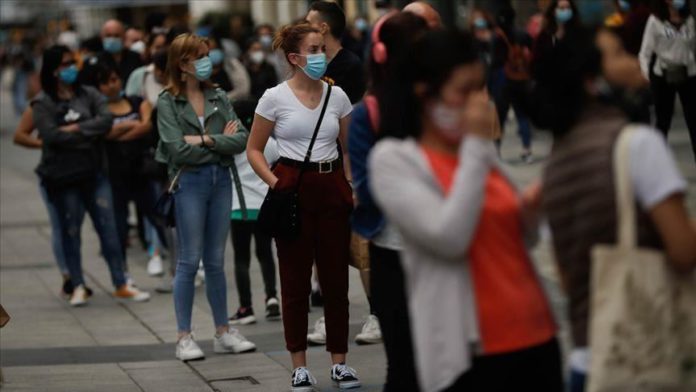 Many of the new infections were tied to one of several active outbreaks in the country.

On Monday, three districts in the northeastern region of Aragon reverted to stricter lockdown measures after authorities detected community transmission.

On Tuesday, officials announced that a fourth district in the area — Bajo Aragón- Caspe — would join those regions by limiting gatherings to 15 people and reducing maximum occupancy in public spaces.

Spain’s chief epidemiologist Fernando Simon said that a total of 11 active outbreaks were being monitored on Monday night.

One of the other most concerning outbreaks has been confirmed at a nursing home in Lleida, also the northeast of Spain. There, 13 residents and five employees have tested positive for COVID-19. Four of them have been hospitalized.

Clusters of cases have also been detected in irregular migrants who arrived by ship on one of Spain’s Canary Islands, in farmworkers in Huesca, a meatpacking plant in Valencia, in hospitals around the country and deriving from two family reunions.

On Tuesday, Spain’s Deputy Prime Minister Carmen Calvo said that outbreaks were to be expected as part of the new normal, and they were being controlled by tracking, testing and tracing.

“If the situation becomes serious, we will declare the state of emergency again, either nationwide or in part of the territory,” she added in an interview with Spanish broadcaster Antena 3.

“There is no doubt that we would be forceful in our response again. That is what saved us,” she said.

Spain’s state of emergency was lifted on Sunday, allowing for free circulation within Spain for the first time since mid-March. The same day, the country opened borders to the rest of Europe, with the exception of Portugal.

As part of the new normal, the onus has mainly shifted back onto individuals to avoid infection. Masks, however, do remain legally mandatory in certain situations and occupancy remains slightly limited in a variety of establishments.

On Tuesday, the country reported one more death from COVID-19, bringing the total number of lives lost in Spain to 28,325.