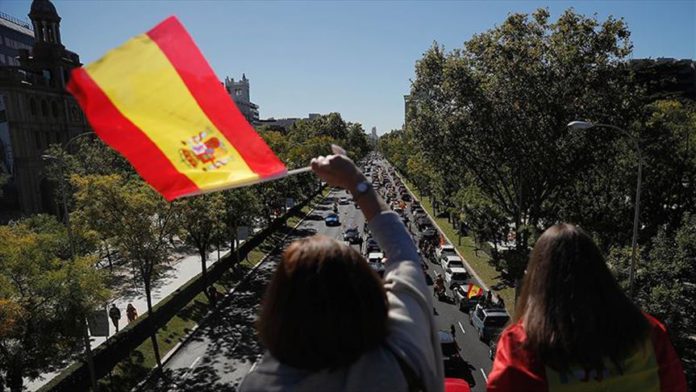 Spain’s national holiday was marked by protests and COVID-19 restrictions on Monday, as the Health Ministry reported nearly 28,000 new infections over the weekend.

The number of coronavirus cases between Friday and Monday rose nearly 4,400 compared to the previous weekend, with the regions of Catalonia and Navarra showing some of the most worrying increases.

Across Spain, another 218 people were also confirmed to have died of COVID-19, bringing the total to 33,124.

Monday was the first time in 33 years that Spain’s national holiday was not accompanied by a military parade. This year, the Spanish king led a small military ceremony in Madrid attended by most of the country’s top politicians.

Dozens of protestors waited nearby calling for the country’s progressive coalition government to resign.

The ceremony was followed by a large car rally staged by the far-right party VOX to protest the state of emergency that was implemented in the Spanish capital last week. Around midday, it brought traffic to a halt in parts of downtown Madrid.

Outside of Madrid, residents of the region of Navarra are gearing up for new restrictions set to take effect at midnight, which include gatherings limited to six people, reduced capacity, and bars and restaurants having to close at 10 p.m.

“We are not going to assume that a percentage of our people have to die and others have to get extremely sick so that the majority of people can continue life as usual. Not everything goes,” said Maria Chivite, Navarra’s president, on Sunday.

Catalan health officials also said to prepare for more restrictions across the region this week. The residents of Terrassa and Sabadell have already been asked to stay home whenever possible.

On a per capita basis, Navarra is the worst-affected region in Spain, followed by Madrid, which has already limited movement in and out of several cities, including the Spanish capital.