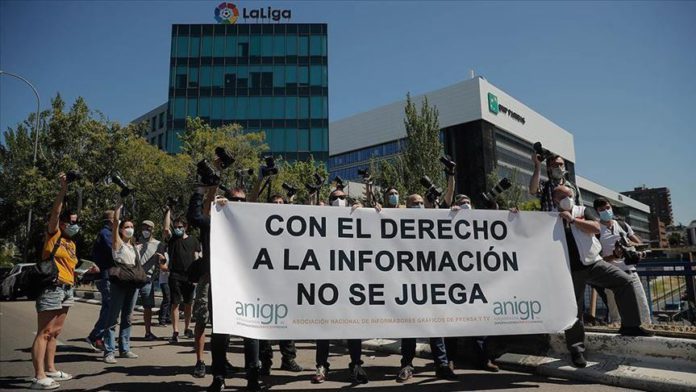 With Spanish club football set to resume after June 8, photojournalists across the country have taken to the streets against the decision to ban them from covering games and training sessions.

Dozens of journalists protested outside stadiums across Spain and also in front of the headquarters of La Liga, which administers the country’s two professional leagues, in the capital Madrid on Thursday.

“Photography is different than photojournalism,” said a statement from the Photojournalist Association of Cadiz (AFPC).

“Photojournalism involves a commitment to information and the truth, and it’s more necessary than ever in historic moments.”

As part of safety regulations introduced due to the coronavirus pandemic, Spanish authorities and La Liga have decided to keep photojournalists away from matches and training activities.

Just one agency, directly contracted by La Liga, will be allowed to cover the Spanish football leagues until safety restrictions are lifted.

“La Liga is becoming a photography agency, leaving behind all the professionals in the sector,” said the National Confederation of Labor (CNT) union in Madrid.

“It impedes access to training and stadiums and, as a consequence, becomes the exclusive manager of all the material.”

“It’s egregious,” the Federation of Journalistic Associations of Spain said in a statement, referring to the monopoly on football coverage.

Victor Lerena, president of the ANIGP-TV association, told local media that between 4,000-5,000 people in Spain earn their living from sports journalism.

The majority are self-employed and have lost work due to the suspension of sporting activities since mid-March.

The AFPC claims that authorities have been acting arbitrarily, permitting photojournalists to enter stadiums in some provinces, but not others.

Two of Spain’s largest national journalism associations have also opposed the regulations, saying football photojournalists should have the “right to exercise journalism freely.”

The situation was encapsulated by a placard held by a protester in Cadiz – “This is a job, not a hobby.”

Pakistan says no change in stance on Kashmir