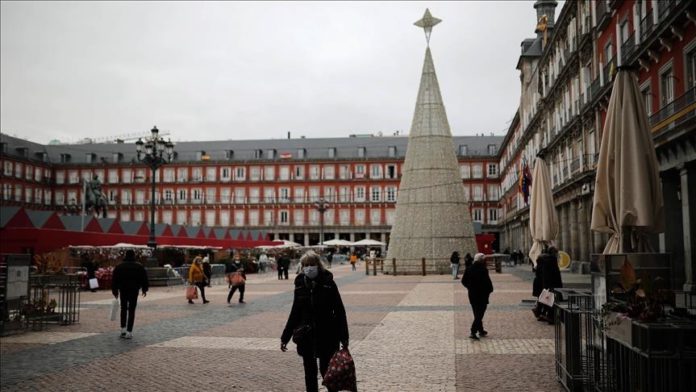 Most of Spain began to allow free movement for those visiting friends and family on Wednesday, even as the Health Ministry reported the highest number of daily infections in more than a month.

Another 12,386 new coronavirus infections were detected, the highest daily jump since Nov. 20.

It was a day of movement for thousands who took advantage of a window, set to last until Jan. 6, which permits people to visit friends and family for the holiday season.

As a result, airports and train stations were bustling as long-estranged family members embraced. Some traffic jams were reported, especially where police checked documentation to ensure people were traveling to visit friends or families.

Valencia, which continues to experience a sharp growth in new cases, was the only full region to keep its borders closed.

On Wednesday, the Catalan counties of Cerdanya and Ripolles were also confined after new coronavirus cases spiked. Madrid officials say more neighborhoods will also be closed off after significant rebounds in infections.

As people travel to celebrate the holidays, during which restrictions like maximum gathering size and curfews will also be relaxed in much of Spain, doctors are bracing for the consequences.

“I’m quite sure that in January there will a new spike in cases. From what we know about the virus, it’s bound to happen when a high infection rate coincides with a period of relaxation, and especially since now over the holidays people are getting together indoors,” Dr. Cesar Carballo told TeleMadrid.

On Wednesday, confirmed COVID-19 deaths dropped from Tuesday, with another 178 lives lost to the pandemic.

Still, like many European countries, on Tuesday Spain banned travelers from the UK unless they are residents in Spain or Spanish citizens.

Turkey to start giving BioNTech jabs in next few days﻿﻿﻿﻿