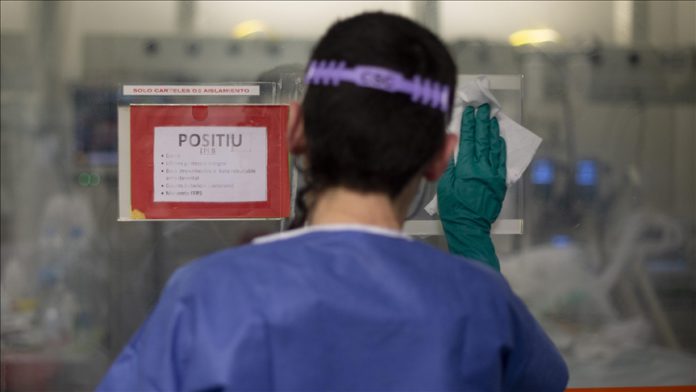 For the first time this year, Spain’s coronavirus infection rate is no longer in the “extreme risk” category, according to Health Ministry figures released on Tuesday.

The Health Ministry reported just under 7,500 new infections, the lowest daily tally since December, and 443 more deaths on Tuesday.

Still, more than 100,000 people in Spain have tested positive for COVID-19 in the past 14 days – a figure that set off alarm bells when it was first reached in early autumn.

While hospitalizations have dropped, 32% of all Spain’s intensive care units remain full of COVID-19 patients, according to latest data.

Although Spain avoided a nationwide lockdown that many neighboring countries were forced to implement, its patchwork of restrictions such as curfews, movement curbs, and closing bars, restaurants and non-essential shops, has managed to considerably reduce new infections.

Similarly, the vaccination campaign is already being hailed as a success, particularly for bringing down infections and deaths in nursing homes.

The southern region of Murcia was the first to finish vaccinations in nursing homes, completing the second dose weeks ago.

The drive appears to have eradicated the virus from care centers, with no active infections in Murcia’s nursing homes for now.

In total, Spain has administered 3.1 million COVID-19 vaccine doses, with 1.2 million people having received both shots.

As a result of dropping infection rates, most regions of Spain have already started to relax restrictions.

Experts such as eminent virologist Margarita de Val are already warning about the possibility of a fourth wave in Spain.

“As soon as we bring down the curve, we start to relax measures. As a society, we’re choosing to live on the edge, even though there are so many deaths,” she told Spanish daily 20 Minutos.

“We could see infections increase again by the end of March. And if we’ve made plans for Easter, we won’t change them, we’ll meet up with people and it will still be cold enough that we’ll be indoors. Those conditions make it possible for another wave as strong as the last.”

In Catalonia, where regional elections were recently held and COVID-19 patients were able to vote in-person, health authorities are already noticing signs of increasing contagion.

Each infection is leading to an estimated 0.99 more cases, a number that has steadily climbed from 0.83 over the last two weeks.