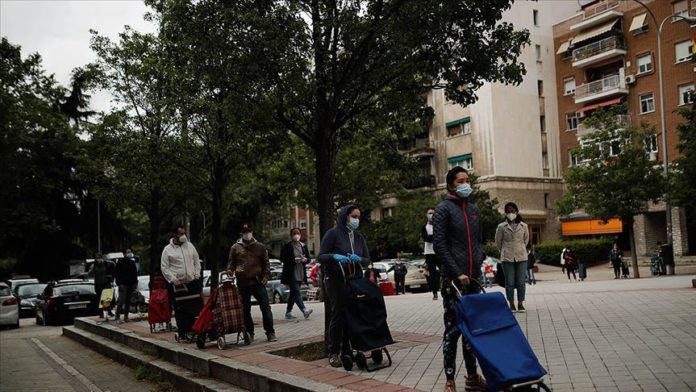 As Spain leads Europe in a post-lockdown resurgence of COVID-19 cases, experts are clamoring for authorities to urgently change their strategy to limit the spread of the infectious disease.

“New measures ought to be taken this week. If not, I think it’s going to be much more difficult to control, and we’ll run the risk of rapid expansion in more areas of Spain,” Dr. Daniel Lopez Acuna, former director of the World Health Organization’s Health Action in Crises Recovery and Transition Programmes and professor of the Andalusian School of Public Health, told Anadolu Agency.

In two weeks, Spain reported more cases than Italy, Germany, Greece, the UK and Turkey combined, according to WHO figures.

Hospitalizations are relatively low, but the number of weekly admissions has nearly doubled in the last two weeks to 864. Deaths are also low but steadily increasing.

“The trends that we’re seeing are bad. Cases are increasing progressively in nearly every region, and so are the number of close contacts of those who test positive,” Dr. Joan Carles March, a professor at the Andalusian School of Public Health, told Anadolu Agency.

“But it seems to me that a lot of people don’t care very much.”

– Is the new normal too normal?

Since June 21, when the state of emergency ended, Spain has been living in the so-called new normal.

Tourism is broadly encouraged as the industry struggles to cope with a dismal summer season marked by several European countries enforcing quarantines on arrivals from Spain. In July, nationwide mobility reached 98% of what it was during February, according to Spain’s Ministry of Transport.

Star-studded galas, large weddings, and even government-organized concerts continue with some extra hygiene and spacing measures. Bars, restaurants and some nightclubs remain open, although some regions have limited or moved to shut down nightlife entirely.

Young people especially have embraced the freedoms of the summer with fearless enthusiasm. The Ministry of Health reports that 70% of recent infections have been detected in people under the age of 30.

Masks are mandatory in public spaces – indoors and out – but they are not compatible with eating or drinking, two activities upon which social life in Spain revolves.

A handful of towns with bad outbreaks are cordoned off, but the power lies with the regional governments to make those decisions. There is no clear threshold for when confinements must be ordered, so some of the worst-hit areas still allow free movement in and out.

And for many experts, current efforts in Spain are falling short.

“If it were up to me, I’d declare a state of alarm in regions where there is community transmission and return to stage one of the de-escalation to break local chains of transmission. In those places, you need more draconian measures like sealing off areas and surgical confinements…A city like Zaragoza in Aragon should confine,” Lopez Acuna said.

The former WHO director also said that Spain needs stricter measures and enforcement on nightlife and more cautious behavior on an individual level.

“From a social standpoint, I don’t think there’s been an internalization that this summer can’t be normal. Sacrifices are needed — not only economic and social, but in personal behavior,” he said.

March agrees with the last points, insisting that “this is not a summer for get-togethers.”

Less in favor of draconian measures for now, he wants to see more enforcement of the measures that are already in place, better coordination between regional governments and more concrete decisions in terms of gatherings and workplaces, particularly around the living situations of migrant workers. Better messaging, especially to young people, is another key, he said.

Esteemed Spanish virologist and immunologist Margarita Del Val similarly advocates for stricter and more coercive enforcement, suggesting more fines and even prison for those who do not comply with the rules.

Virtually all experts agree that reinforcing contact tracing — especially in regions where it has struggled, such as Madrid and Catalonia — is fundamental to controlling the virus.

“Now is the moment to work harder because in September students are supposed to return to school and many people will return to work. Then, everything could be complicated by seasonal colds and flu,” March said.

As it stands, most regional governments, which are also in control of education, lack a clear back-to-school plan. Even so, Isabel Celaa, Spain’s Minister of Education, told Cadena SER in late July that schools will open in September, even if cases continue to increase.

“Schools must remain open. It’s something that cannot be renounced,” she said.

“If in September, the regions have the same number of cases that they do today, it will be basically impossible for schools to open.”

And while the central government has said it is focused on bringing down infections before September, no major changes at a national level appear imminent.

The current measures “are being applied and are working,” said a press release issued Monday after a meeting between Prime Minister Pedro Sanchez, Health Minister Salvador Illa and the country’s public health director Fernando Simon.

After the meeting, Simon said that regional governments were doing an “excellent job” for now, although he did warn that “more drastic measures” are still a possibility if transmission exceeds the capacity for detection.

Simon has denied the existence of a second wave of COVID-19 in Spain, a debate that has split Spain’s epidemiological and scientific community.

Several experts say the country is facing a second wave, while others argue the first wave never went away.

Simon’s position is that until the government can be sure that Spain has “uncontrolled community transmission” and not just a greater capacity for detection, he will not call it a second wave.

“We know that detecting more cases leads to a clear communications problem…because the cases apparently increase. But if we had the same capacity for detection two months ago, we would be seeing a decrease,” he said in a press conference last Thursday.

He said that Spain is currently detecting around 60%-70% of all cases now, compared to less than 10% in early stages of the pandemic.

On the other hand, last week, 6.2% of Spain’s tests came back positive. The WHO says a positivity rate above 5% signals the virus is not under control.

Last Thursday, The Lancet medical journal published a letter signed by 20 of Spain’s leading experts calling for an independent review into the Spanish COVID-19 response.

Dr. Helena Legido-Quigley, a professor of global health at the London School of Hygiene & Tropical Medicine who is based in Spain, led the effort.

“Spain needs to start preparing as if it already were in a second wave,” she told the digital diary Newtral this weekend. “One of the goals of the independent review is to determine and analyze the government’s upcoming plans. I don’t believe they have any for the next five or six months.”

Whatever happens, the experts consulted don’t believe that a second wave in Spain will be as devastating as the first, when more than 100,000 people were hospitalized for COVID-19, more than 40,000 people are estimated to have died, and the entire country went into one of the world’s strictest lockdowns.

Hospitals have stocked up on protective equipment and ventilators, while more knowledge of the virus has led to slightly more effective treatment options. Likewise, the government is more aware of the dangers of COVID-19 and how to combat it than it was earlier this year.

On the other hand, healthcare professionals are drained from the first wave. A study by a prestigious Spanish university that looked at doctors, mostly in Madrid, found that 53% of them showed signs of Post-Traumatic Stress Disorder (PTSD) and 79% were suffering from anxiety.

The summer uptick has already caused some hospitals to begin postponing non-urgent surgery, and a larger wave could lead to already neglected ailments going further unchecked.

Even if the virus doesn’t cause as many deaths as it did when it first emerged, it still causes high levels of fatality in vulnerable groups and can cause debilitating long-term effects like fatigue, headaches, vertigo, cognitive dysfunction, lung damage, hair loss and cardiac issues.

On top of that, a second nationwide lockdown, or even broader regional lockdowns, could be the last straw for many Spanish businesses, which are still struggling to recover from the impacts of what’s happened since March.

“In my view, Europe, and Spain in particular, rushed into opening up tourism. But real economic growth isn’t possible without health security,” said Lopez Acuna.