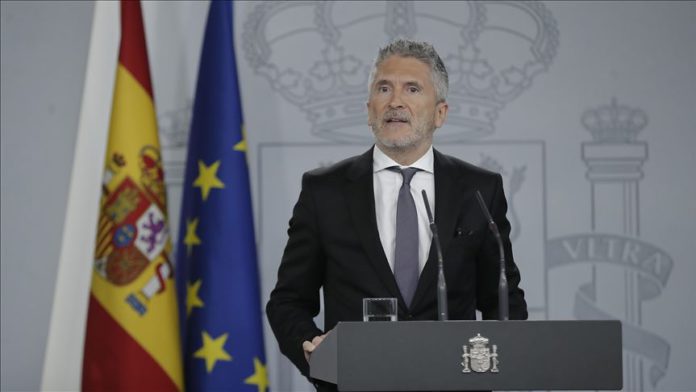 Voices across Spain’s political spectrum are calling for Spanish Interior Minister Fernando Grande-Marlaska to resign over his “disappointing” and “irresponsible” handling of a growing humanitarian crisis on the Canary Islands.

This year, at least 16,760 migrants have arrived by boat to Spain’s Atlantic archipelago — a tenfold rise compared to 2019 — according to the Interior Ministry. Hundreds more have died on the dangerous journey.

A massive influx of irregular arrivals to the islands, combined with the coronavirus pandemic, has led to chaos in recent weeks.

Last week, the Human Rights Watch called out Spain for detaining more than 2,000 people on the Arguineguin pier in undignified conditions and without proper legal procedures.

The improvised detention area was created in part to conduct medical screenings for coronavirus.

On Tuesday, around 220 Moroccan migrants were evacuated from the pier and taken by bus to the capital city of Gran Canaria. They were released with nothing to eat and nowhere to go.

Most stayed in a downtown square where some local residents brought them food and water. Spanish news agency EFE interviewed people who said they were held on the pier for five days, given little food and were not able to shower.

Following the incident, Laura Fuentes, the leader of the Canary Island Podemos party, called for the “immediate resignation” of Marlaska.

Spain’s interior minister is a member of the Socialist Party and Fuentes said it was “deeply disappointing” that a progressive government has “abandoned” the migrants and shifted responsibility onto local authorities.

On Wednesday in the Spanish parliament, members of the Canary Coalition, Popular Party, and Citizens Party (Ciudadanos) told the minister to step down for incompetence and inaction.

Marlaska refused to resign, saying he would open an investigation into Tuesday’s incident, and blamed the former conservative government for dismantling the infrastructure to hold and process migrants and refugees.

Some of the people trapped on the pier have been relocated to empty tourist accommodations, while others are being transferred to a military camp that has a reported capacity of around 800 people.

According to the Red Cross, on Wednesday morning, around 2,300 people were still on the overcrowded pier after 102 more people were rescued at sea by the Maritime Safety and Rescue Society overnight.

Local media reported that just 200 people were expected to be moved from the pier to the military camp on Wednesday.