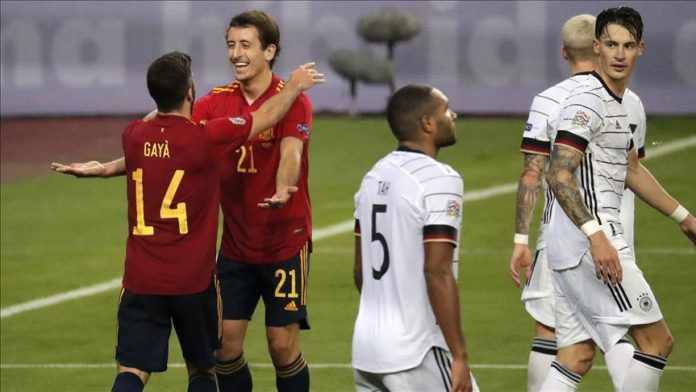 The Spanish national football team whipped Germany 6-0 in a UEFA Nations League match Tuesday in an embarrassing loss for the Germans.

Spanish winger Ferran Torres scored a hat-trick in Seville in a major contribution to his team’s victory.

Alvaro Morata, Rodri and Mikel Oyarzabal were the other scorers for Spain.

German midfielder Toni Kroos said his team was surely bothered by the loss and praised their opponents for their attacking skills.

“It’s probably not the most bitter defeat of my career, but surely one of the biggest. It hurt. We did not get any grip on them. Spain showed us how to attack,” Kroos said after the match.

Germany last lost 6-0 to Austria in 1931, and Tuesday’s loss is now among the Germans’ heaviest defeats in history.

Hungary thrashed Germany 8-3 in the 1954 FIFA World Cup as the margin was five goals.

Germany was in second place with 9 points.

Ukraine came third with 6 points and Switzerland had 3 points.

Tuesday’s match between Switzerland and Ukraine was canceled because of multiple positive coronavirus tests.

UEFA’s Control, Ethics and Disciplinary Body will decide the fate of the match.