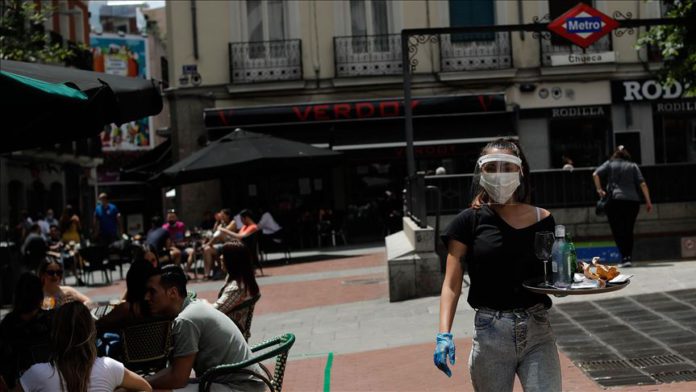 As much of Spain moved to relax lockdown measures on Monday, the country reported another 50 deaths due to the novel coronavirus, as well as 132 new infections.

The Ministry of Health said it was reviewing and validating each individual case, which was why the number decreased so dramatically on Monday.

Despite the 132 infections confirmed in the last 24-hours, the total number of confirmed cases in Spain also dropped by around 300 to 235,400.

This is not the first time Spain has adjusted its historical dataset. Since the beginning of the crisis, there have been several changes to the way Spain’s Ministry of Health collects and reports coronavirus-related data.

Roughly half of Spain entered into phase two of the de-escalation program on Monday. In those parts of the country, theaters, restaurants and shopping malls can now open with limited capacities.

Meanwhile, Madrid and Barcelona, two of Spain’s hardest-hit areas, moved into phase one. That means people may now have a drink on an outdoor terrace or go to small shops for the first time in more than two months.

The Doctors’ College of Madrid warned this weekend that the capital region’s healthcare system was not prepared to deal with another wave.

The organization said that healthcare workers, including those who deal with tracking, are in the same “precarious situation” as before and would now have to increase focus on non-COVID-19 patients.

In Madrid, two of every ten doctors have had to go on sick leave due to COVID-19.

At the same time, Pere Godoy, the president of the Spanish Epidemiological Society (SEE) told Spanish daily El Pais that new outbreaks were “inevitable with the de-escalation.”

“In the sectors that haven’t stopped activity, such as the food sector, I’m sure that there have continued to be active chains of infection, some of which have not been detected because there were other priorities. These chains could now begin to surface, so we will have to be vigilant,” he said.

Spain is now keen to recover for the summer tourism season. This weekend, Prime Minister Pedro Sanchez told national and international tourists to start planning their holidays in Spain.

On Monday, Spain’s foreign minister announced that the mandatory two-week quarantine for most arrivals would be lifted in July.

The pandemic has killed over 345,000 people worldwide, with more than 5.45 million confirmed cases, while recoveries number around 2.19 million, according to figures compiled by Johns Hopkins University of the US.