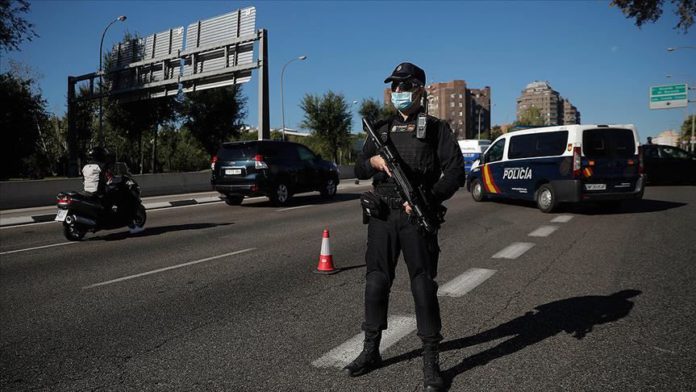 The Spanish government imposed a 15-day state of emergency in the region of Madrid on Friday, a day after a court struck down the previous measures aimed to curb the spread of coronavirus.

The state of emergency allows the central government to enforce stricter measures in the capital region, whose government has advocated for a more relaxed strategy.

On Thursday, a Madrid court struck down public health measures imposed by the central government last Friday, ruling that they infringed on individual liberties and were not legal outside of a state of emergency.

The state of emergency now restores the rules in Madrid to exactly what they were before Thursday’s court ruling.

Non-essential movement in and out of the city of Madrid and several nearby municipalities is forbidden again, while bars and restaurants can only operate at 50% capacity and must close at 11:00 p.m. local time (2100GMT).

Maximum capacity is also reduced in places of worship, gyms, shopping centers and more. Schools, however, will continue to operate as usual.

The state of emergency came as Spain enters into a long-weekend. Interior Minister Fernando Grande-Marlaska announced that 7,000 police officers would be patrolling the perimeters of the confined cities to ensure no one is leaving or entering for unjustified reasons.

The state of emergency is the culmination of growing political tensions between the progressive central government and conservative Madrid authorities.

Over recent weeks, the government of Madrid refused to confine the entire capital city, which triggered the central government to step in last Friday and enforce new measures.

The government of Madrid then challenged the legislation in court and won on Thursday, causing the measures to be struck down and widespread confusion over what rules were in place.

“We had to act. We couldn’t do nothing […] we had to act because the government of Madrid wasn’t,” said Health Minister Salvador Illa in a news conference.

Madrid’s premier has yet to comment but Madrid Mayor Jose Luis Martinez-Almeida harshly criticized the decision.

“This is a sad day because the constitutional mechanism, the state of emergency, was perverted only to mock a court’s decision […] and it’s deeply disproportionate with what’s happening in Madrid at the moment,” he said in a press conference, calling the decision “unjust.”

According to the latest data from Thursday, over 21% of Madrid’s hospital beds and nearly 40% of intensive care units in the region are being used by COVID-19 patients.

The rate of infection in Madrid has significantly fluctuated this week. On Tuesday, the Health Ministry reported 710 infections per 100,000 people over the last two weeks in Madrid, but on Thursday the rate had dropped to 563 per 100,000.

Of the 32,688 confirmed deaths in Spain since the pandemic began, 9,737 have occurred in Madrid.