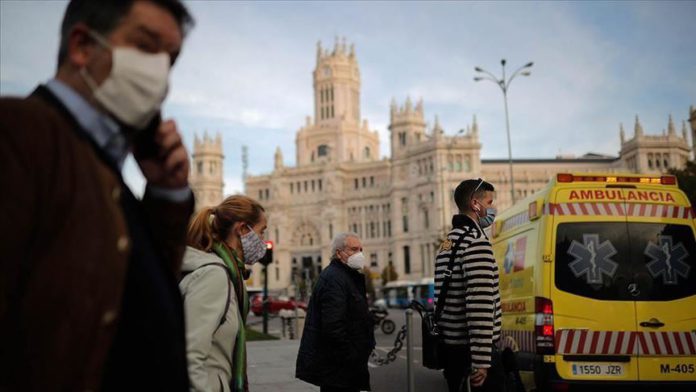 Spain’s number of COVID-19 infections surpassed the 1.5 million mark on Tuesday and the country reported its highest daily death toll since late April.

From February to July, Spain had only confirmed 250,000 cases — not as much due to a lack of testing — but has now detected some half a million new infections in less than a month.

Although the numbers are dizzying, the rate of infection appears to be dropping steadily. On Tuesday, new cases rose by 13,159 — down more than 4,000 compared to the same day last week.

Fatalities, though, surged by 435 on Tuesday — the highest daily jump in the second wave. The Health Ministry confirmed that nearly 41,700 lives have been lost to the pandemic in Spain.

Hospitals are still under significant pressure, with 16% of all beds and 32% of intensive care units currently occupied by COVID-19 patients.

However, the number of active patients dropped by around 450 compared to Monday.

Madrid, the hardest-hit region of Spain at the beginning of the second wave, now sits below the national average in terms of new infections per capita.

Its leaders attribute the use of rapid antigen tests for diagnosis as a major pillar of its success. The regional government also restricted movement and imposed a midnight curfew, but did not go as far as closing bars and restaurants.

In an interview on Tuesday, Ignacio Aguado, the vice premier of the region, said he hopes the rapid tests will be made available to more residents.

He said he wants to give “every Madrid resident” a rapid SARS-CoV-2 test before their Christmas celebrations.

For that, Aguado said he is pressuring Spain’s central government to allow pharmacies to conduct the rapid tests that involve nasal swabs — something that only doctors can do at the moment.

“It would be a revolution — a before and after in the pandemic,” he told the Spanish broadcaster La Sexta.

Spain’s central government, though, is hesitant to take the step, with the country’s chief epidemiologist saying on Monday that it could put pharmacy workers at risk.