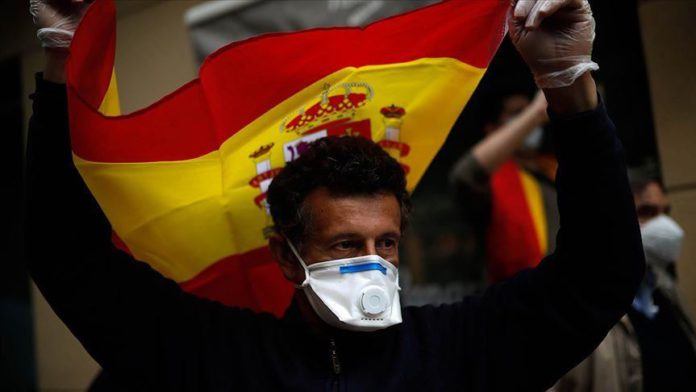 Spain registered 138 more COVID-19 deaths on Friday, down from 217 reported on Thursday.

In total, more than 230,000 people have been confirmed to have the disease in Spain.

Those infections have caused 124,581 hospitalizations and nearly 27,500 deaths, according to the Health Ministry. Nearly 145,000 people have recovered.

On Thursday, anti-government protests continued for the fifth consecutive night in one of Spain’s wealthiest neighborhoods.

Despite heavy police presence, hundreds of protestors took advantage of their rights to exercise outdoors after 8 p.m. and joined up in the Salamanca district in Madrid, calling for the government to resign and to ease the lockdown.

Images showed many of the participants wearing masks, but social distance between protestors was not always maintained.

The region of Madrid has presented its case to Spain’s central authorities for why it should be able to ease the lockdown. The Health Ministry is expected to announce which regions of the country will be able to advance with de-escalation later today.

Last Friday, Madrid’s request to relax the lockdown was denied on the basis of epidemiological and public health criteria, according to the Ministry of Health.

Friday morning, new regulations extended the restrictions on non-essential flights to Spain from international destinations until June 15. All international flights will now be limited to the airports in Barcelona, Madrid, Palma de Mallorca, Gran Canaria and Malaga.

Until Spain’s state of emergency is over, which is not expected to be until at least late June, all travelers to the country are obliged to quarantine for 14 days. Trans-border workers are exceptions.

Turkey: Number of wounded rises to 896 in quake in Izmir