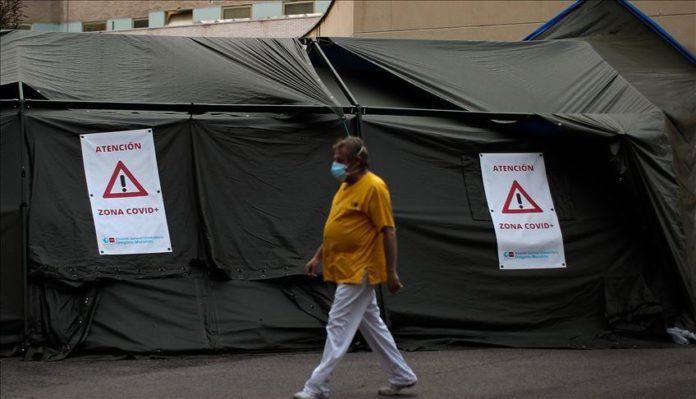 OVIEDO, Spain (AA) – More than 100,000 people in Spain have tested positive for the novel coronavirus over the past two weeks, the Ministry of Health confirmed on Thursday.

Nearly 9,000 new coronavirus infections over the past 24 hours were added to the tally that has surged to 488,513 confirmed cases.

The UK, which has the second-highest case number in Europe, has reported just over 340,000 infections.

As a consequence of the snowballing caseload in Spain, hospitalizations and deaths are accelerating. In the past 24 hours, over 1,000 new COVID-19 patients were admitted to hospitals for the second day in a row.

On Thursday, another 40 people were confirmed to have perished from the infectious disease.

Madrid has been home to nearly one-third of the country’s 100,155 infections over the past two weeks, reporting the worst outbreak both in terms of real numbers and per capita cases.

In an interview with radio station SER on Thursday, Spain’s Minister of Health Salvador Illa said the government is not considering another nationwide lockdown and is instead encouraging “surgical confinements.”

At the same time, Illa ruled out locking down Madrid for the time being, adding that the region’s measures to control the virus have been “adequate.”

Earlier, Emiliano Garcia-Page Sanchez, premier of Castilla-La Mancha, said 80% of infections in his region “arrived from the radioactive viral bomb that was planted in Madrid.”

Despite the high levels of post-summer holiday viral transmission, Spanish students are set to physically return to schools in the coming days and weeks.