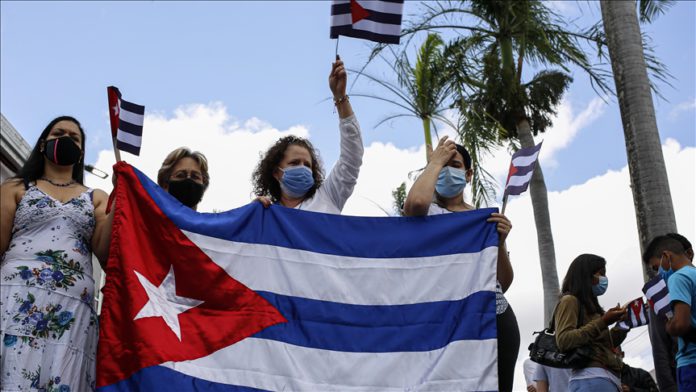 Spain on Tuesday called on the Cuban government to allow protests after thousands of people took to the streets in the communist nation in a rare demonstration of anger over a worsening economic situation and the lack of freedom.

“Spain defends the basic right to peaceful and free protest for all citizens and asks Cuban authorities to respect that,” said the Foreign Affairs Ministry in a statement.

It said that the crisis provoked by the coronavirus pandemic and the collapse of the tourism industry means it’s “necessary” for Cuba to “speed up the rhythm of its reforms.”

In the gently worded statement, Spain said it was studying ways to help alleviate Cuba’s economic situation and the “serious shortages” of goods in the country.

The statement comes as members of Spain’s Podemos party, the junior coalition partner in Spain’s progressive government, side with the Cuban government in blaming the US-led economic blockade for the country’s dire situation.

“I don’t consider Cuba to be a dictatorship,” said Alejandra Jacinto, Podemos MP in Madrid, in an interview with Spain’s public television.

According to exiled rights group Cubalex, at least 100 protesters, activists and journalists have been detained in Cuba since Sunday.

Cuban President Miguel Diaz-Canel said on Monday that demonstrators “got what they deserved.”

“Yesterday we saw criminals. The protest was not peaceful, there was vandalism, they stoned foreign currency stores, items were stolen,” the president said, as he blamed US-orchestrated social media campaigns for manipulating the protesters.

He said the country is trying to “face and overcome” difficulties amid the US “policy of economic asphyxiation to provoke social outbursts in the country.”

Meanwhile, US President Joe Biden said: “We stand with the Cuban people and their clarion call for freedom and relief from the tragic grip of the pandemic and from the decades of repression and economic suffering to which they have been subjected by Cuba’s authoritarian regime.”

Ford Otosan to suspend production due to supply issues