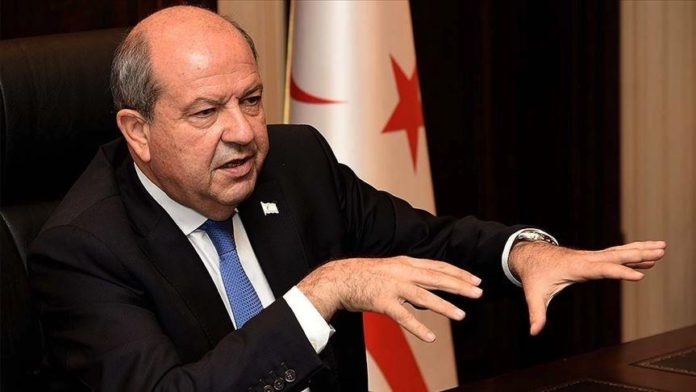 The existence of the Turkish Republic of Northern Cyprus (TRNC) as a sovereign state is as important for the security of Turkiye as it is for the Turkish Cypriots, the TRNC president said on Thursday.

In an exclusive interview with Anadolu Agency, Ersin Tatar said a two-state solution on the island of Cyprus based on equal sovereignty, which is fully supported by Turkiye, is a must to enter the formal negotiation process.

“With no outcome reached in 50 years, it is no longer possible to hold negotiations on a federal structure in Cyprus,” Tatar said.

Tatar hailed Guterres’ statement in his latest report, saying the UN chief has confirmed that official talks on the Cyprus issue cannot begin as two sides cannot find a common ground until the sovereign equality and international equal status of TRNC is recognized.

On the partial reopening of the Maras region in the TNRC in October 2020, Tatar said through this step, they gave a message to the whole world that “the game has now changed in Cyprus, and the Turkish Cypriot side has developed a new vision regarding the Cyprus issue.”

The partial reopening of the region has contributed to the economic structure and tourism potential of the TRNC, Tatar noted.

Maras had virtually become a ghost town as it remained cut off from the world for some 47 years.

Maras was abandoned after a 1984 UN Security Council resolution saying that only its original inhabitants could resettle the town.

Entry into the town was forbidden except for Turkish army personnel stationed in the TRNC.

Turkish and TRNC authorities have repeatedly called on Greek Cypriots and other citizens who own assets in Maras to apply to the Immovable Property Commission.

In 1974, a Greek Cypriot coup aimed at Greece’s annexation of the island led to Turkiye’s military intervention as a guarantor power to protect Turkish Cypriots from persecution and violence. As a result, the TRNC was founded in 1983.

It has seen an on-and-off peace process in recent years, including a failed 2017 initiative in Switzerland under the auspices of guarantor countries Turkiye, Greece and the UK.

The Greek Cypriot administration entered the European Union in 2004, the same year Greek Cypriots thwarted a UN plan to end the longstanding dispute.