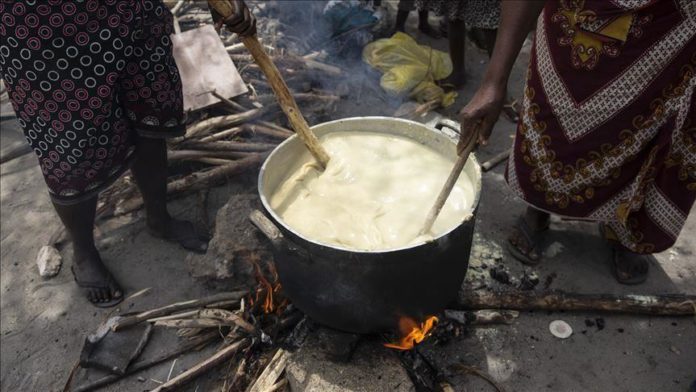 People in South Sudan are reeling under the volatile and soaring food prices to the extent that many of them are preferring to live in UN refugee camps.

People say they are forced to spend 95% of their incomes on buying edibles.

Monica Adhieu,47, a mother of five children who had gone to buy food items in a market in the capital Juba, realized that she could only buy a sack of maize flour with the amount she had earned.

“As you can see I am buying a 50-kilogram sack of maize flour which is now costing 12,000 South Sudanese pounds (SSP) ($50), and that is the only amount left from my salary. It is not possible now for me to purchase any other item,” she told Anadolu Agency.

After spending her earnings to buy food, there is hardly anything left to pay the school and tuition fee of her five children.

She is skeptical, whether her children will be able to return to schools, once they are open after the COVID-19 lockdown. With this hand-to-mouth existence, it is impossible to even think of shopping.

No money to pay rent

The food inflation has forced a private primary school teacher John Bol,38, to move to a refugee camp in Uganda along with his six children, where he gets free food from the UN.

“My monthly salary was 25,000 SSP ($150). But since lockdown enforced in April, I have not received any money. When food prices went higher, I took my family to a refugee camp in Biale settlement,” he said.

A house owner chased away Mary Thon, 34-year old mother of four children after she failed to pay rent, as all her earnings were spent on buying food.

“My monthly salary cannot even buy even a single item, like a bag of maize flour or tin of cooking oil. My children often sleep with empty stomachs or only get only a single meal a day,” she added.

The urban poor – with their overdependence on markets coupled with insecure, inconstant, and low-paying jobs – are the hardest hit by the economic crisis. The livelihoods of almost more than half of 610,000 people living in Juba and Wau, has been severely undermined.

Traders operating within the busy Konyo Konyo market in Juba are attributing skyrocketing commodity prices to the depreciation of the South Sudanese pound against the US dollar.

Maker Abu Majok, a wholesale trader dealing in both food items and non-food items said that the high exchange rate of the dollar vis-à-vis the South Sudanese currency has resulted in a surge in prices.

“I sell food items like Egyptian beans, Tania, and non-food items such as soap, sleeping mats. We import our goods from Egypt and transporting them to Juba has become costly,” he added.

Daniel Kech Puoch, the second deputy governor of Bank of South Sudan (BOSS) said the depreciation was necessary as the foreign currency reserves were depleting fast.

Majok said that transporting a 40 feet container from Egypt to Mombasa costs about 4,000 dollars and then from Mombasa to Juba it accumulates to 5,500 dollars.

He disclosed that customs officials charge 2,500 dollars for every container as tax

93 sites of 'potential human burials' found near residential school in...