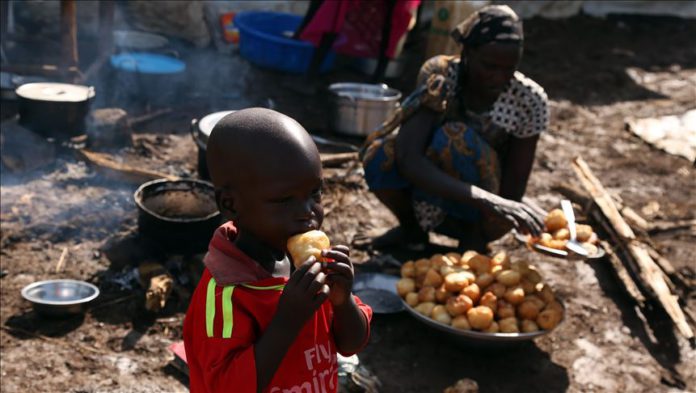 Thousands of people displaced by heavy rains and floods in South Sudan’s Jonglei and Western Equatoria provinces are now facing the twin threats of hunger and disease.

The Eastern African country, which recently emerged from nearly a decade of armed conflict and last year’s devastating floods, has pleaded to aid agencies and foreign countries to step in to help the people affected.

Most homes from the town of Bor to Twic East have been submerged in a devastating flood, displacing 200,000 people. The water level has risen 1.5 meters (4.9 feet). Aid agencies believe the floods will aggravate food crises in the region.

“It’s terrible, people have been displaced in Bor town, the whole of Twic East is flooded,” said Gabriel Deng Ajak, who runs the Relief and Rehabilitation Commission in Jonglei.

Like thousands of others, Achai Kuol,18, along with her child, traveled some 200 kilometers (129 miles) to the capital Juba to escape the rising waters.

“I lost everything and there was no place to stay in Jonglei. There’s water everywhere, “she said.

Deborah Arok, 65, was airlifted from Panyagoor in the Jonglei province after the floods cut off roads.

“I’ve been sleeping in the cold for over a week and now I’m suffering from something like pneumonia,” she said.

Many adults and children living in the open air under humid conditions in Juba have reported rheumatism and other ailments.

In Western Equatoria, residents sheltering in government buildings are awaiting food and medicine.

“We’ve taken shelter in a hospital. And we’re afraid of the rain coming again. There are no tents around,” said Eric Zagi, a resident.

Mary, a mother of three, said most people are without food and drinking water. Along with other residents, she and her children are camping out in a school.

“If you want to help us, we need tents, food items, and mosquito nets. I was displaced from the Panjak suburb to the town of Bor, of Jonglei,” Grace Aluel, a single parent of seven, told Anadolu Agency on the phone.

“All our belongings were swept away by water,” she said, adding that she and her children as well as her old mother and a sick uncle are camped out at the Malek Secondary School in the town.

People sleep out in the open, with no protection from rain or mosquitoes.

She said to prevent waters entering the camps, people have been putting up embankments for the past eight days, but the floods keep breaking them.

Lino Akec Garang, an elderly man who fled from Lekyak to escape floodwaters, said he could barely rescue his children when the waters started entering his home at night.

“Now people are suffering from malaria but the nearest health facility can’t treat it,” Garang said.

David Deng traveled for six days to reach a relief camp in Bor.

“We trekked a long distance to flee Wangulei in Twic East. It is indeed a very bad situation,” Deng told Anadolu Agency.

Mabior Atem, Jonglei state’s secretary-general, said some 75,000 people in Twic East and about 60,000 people in the area of Duk have been displaced.

Mabior said the governor of Jonglei and other officials are visiting flood-affected areas to assess the damage.

“They will be visiting where the embankments have been broken and displaced people have been put. They will use that information to determine whether a state of emergency needs to be declared by the president,” he said.

He said that over 90% of the town is submerged by water and there are already reports of deaths.

Speaking to Anadolu Agency, Mary-Ellen McGroarty, World Food Program (WFP) deputy director in South Sudan, said they are sending an excavator to put up embankments and also amphibious, all-terrain SHERP vehicles to deliver bags of sand to control the floods.

“The floods have had a devastating impact on people. Houses and shops, as well as the market in Bor, have been submerged. People have also lost their crops, In Jonglei, we’re witnessing the triple threat of hunger, violence, and floods,” she added.

According to the last Integrated Food Security Phase Classification (a collaborative effort between government ministries, UN agencies, and other partners), large parts of Jonglei and the Greater Pibor region are facing an intense food shortage.

Djokovic advances to second round at Australia Open