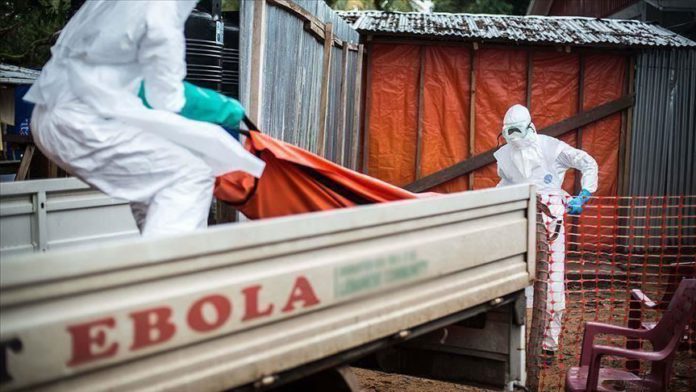 South Sudan is on alert as Ebola is lurking in the neighborhood and the COVID-19 pandemic rages on, overshadowing the threat of Ebola in neighboring Democratic Republic of Congo (DRC) spilling over.

The new Ebola outbreak in the western part of the DRC is of grave concern as cases reached 100 in less than 100 days, the regional director of the World Health Organization (WHO) for Africa said last Friday.

The DRC shares its borders with nine countries, including Angola, Burundi, the Central African Republic, the Republic of Congo, Rwanda, South Sudan, Tanzania, Uganda, and Zambia, and there is regular cross-border movement of people, goods and services in the region.

Combined with weaknesses in national health systems, the nine neighboring countries are at very high risk of an Ebola outbreak, according to the WHO. In June 2019, three members of a family from the DRC crossed the border into Uganda; all three subsequently died of Ebola.

The outbreak however still remains a concern for South Sudan, said Dr. Thuou Loi, the spokesman for the Health Ministry.

“We should be worried.”

“Ebola is emerging now in the DRC and we are neighbor to it. The DRC is a walking distance to some of our counties especially in western Equatoria.”

The health department “will ensure that preventive measures for Ebola are exerted or strengthened so that we are ready to deal with public health issues of international concern including Ebola, COVID-19 and other viral diseases,” Loi said.

“As a country of course we will continue to increase our efforts in the fight against COVID-19 and the emerging Ebola in the DRC,” he vowed, also urging the people to protect themselves from the diseases.

“I am very worried and scared of this disease [COVID-19]. It also poses new challenges for me because I have to tell my community to stop greeting each other and to keep physical distance from one another which will be deemed very rude, but I have to do it to save lives,” Mabior Mading, 67-year-old local chief of Yambio, told Anadolu Agency.

With a 4,000 kilometer (nearly 2,500 miles) distance between the epicenter of the new outbreak and the border, South Sudan is categorized as a priority two country for Ebola disease preparedness, Joseph Wamala, the public health officer at the WHO, told reporters in the capital Juba.

The outbreak, the 11th in the DRC, was declared on June 1, 2020 in the northwestern Equateur province and has since spread to 11 of the province’s 17 health zones, according to the WHO, which said that the number of cases reached 100, a near two-fold increase in a little over five weeks.

The world is so interconnected and that a distance of 3,000 kilometers (1,864 miles) can mean a few meters considering the speed with which people can move by air, Wamala said.

“We did risk assessment so that we will be able to identify critical gaps to address in terms of improving the overall coordination, the capacity to detect cases at the local level, the capacity to test cases using geneXpert platform, the capacity to monitor our borders and manage cases.”

Such worries come as the country has not mitigated the spread of the infections of COVID-19.

South Sudan has confirmed 2,510 cases of coronavirus with 47 deaths and 1,294 recoveries to date.

“I fear diseases like Ebola. We live near the border with [the Democratic Republic of] Congo where people have died from it. Its big threat to us here,” Victoria Hayat, a resident of Yambio, told Anadolu Agency via phone.

“The virus is spreading across a wide and rugged terrain which requires costly interventions and with COVID-19 draining resources and attention, it is hard to scale up operations,” said Matshidiso Moeti, the regional director of WHO for Africa.

The WHO and the DRC government declared the country free from the 10th Ebola outbreak in June.

Starting in North Kivu in August 2018, the epidemic was the second-largest outbreak in the world and particularly challenging as it took place in an active conflict zone. There were 3,470 cases, 2,287 deaths and 1,171 survivors, according to the WHO.

The disease caused a global alarm in 2014, when the world’s worst outbreak began in West Africa, killing more than 11,300 people, and infecting an estimated 28,600 people as it swept through Liberia, Guinea and Sierra Leone.

*Rodrigue Forku from Yaounde, Cameroon contributed to this story.