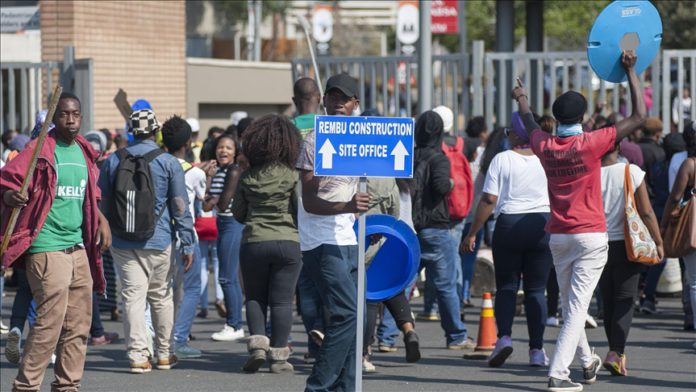 Students of most universities and colleges across South Africa protested Monday, calling for a nationwide shutdown of all public universities.

Students at Wits University in Johannesburg were seen marching on streets of Braamfotein near the university where they forced businesses to close.

About two weeks ago, scores of students from Wits University and the University of Johannesburg embarked on protests against the administration’s decision to stop registration of students who have not cleared outstanding dues.

Protests turned violent last Wednesday when police fired stun grenades and rubber bullets at students, causing the death of 35-year-old Mthokozisi Ntumba, a bystander who was not part of the demonstration.

“We are seriously alarmed at reports that one person has been killed, allegedly by the police, and countless others shot at with rubber bullets,” Shenilla Mohamed, Amnesty International’s executive director for South Africa, said in a statement.

She added: “Security forces must guarantee students’ right to peaceful assembly and refrain from using excessive force. Students have a right to express their grievances and the authorities must respect this right.”

The Higher Education Department is expected to issue a statement to clarify the situation.

The South African Students Congress called for a national shutdown of all institutions of higher learning as part of the student’s ongoing protest.

Over 40 killed in Cameroon road accident