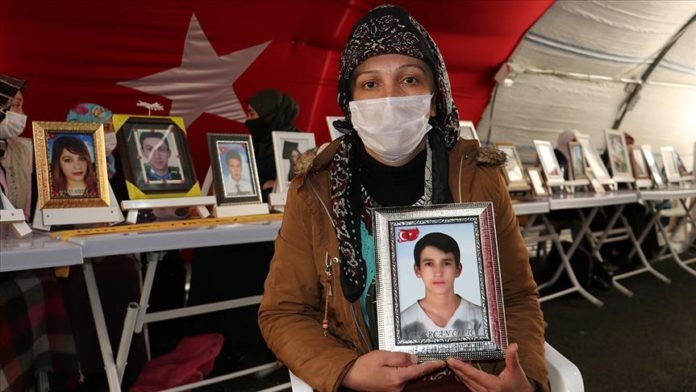 Once dreaming for her children to get a proper education and escape the poverty she had to deal with her entire life, Nihal Ciftci has for years committed herself to finding her long-lost son, Emirhan, after his abduction at just 14 years old by the PKK terror group.

Only weeks after starting his high-school education in southeastern Turkey, Ciftci says her son suddenly disappeared without a trace in 2012. Emirhan’s mother blames the PKK and the Peoples’ Democratic Party (HDP), which is accused of links to the terror group.

After nine years of searching, the tearful mother joined an anti-PKK sit-in protest in Diyarbakir province earlier this month with other families whose children have allegedly been abducted by the terrorist organization.

The protest began on Sept. 3, 2019, when three mothers said their children had been forcibly recruited by PKK terrorists. It is situated outside the provincial offices of the HDP and has been growing since then.

“[Emirhan] had just started high school. I sent him to the school one day and he didn’t return,” said Ciftci, underlining that her son had not been aligned with any political or ideological creed at the time of his alleged abduction. She has yet been unable to contact him.

“I joined [protest] 15 days ago. I’m here primarily to make it clear where I stand and make my voice heard to my son [abducted by PKK terror group]. If he’s alive, I want him to surrender to the [Turkish] state.”

“My fellow mothers and I aren’t daunted by the threats, and we won’t leave without our children.”

She continued: “A mother’s love is something else, nobody can understand. Those who haven’t suffered [loss of child] can’t know this […] I’ll never stop following him until I die. They’ll hand over him to me, dead or alive.”

Ciftci feared her worst nightmares had become reality when in 2018 a PKK-affiliated TV channel claimed her son had been killed. However, DNA tests later confirmed that the body was not Emirhan’s.

Though this was a source of relief for the mother, not knowing his son’s fate was also deeply distressing, a feeling that was “killing her every day.”

“If he’s alive, I want him to surrender to the [Turkish] state. Well, I don’t know who he is working for there, or for what purpose. These have nothing to do with being Kurdish and Turkish. I don’t want him to be anybody’s pawn,” she lamented.