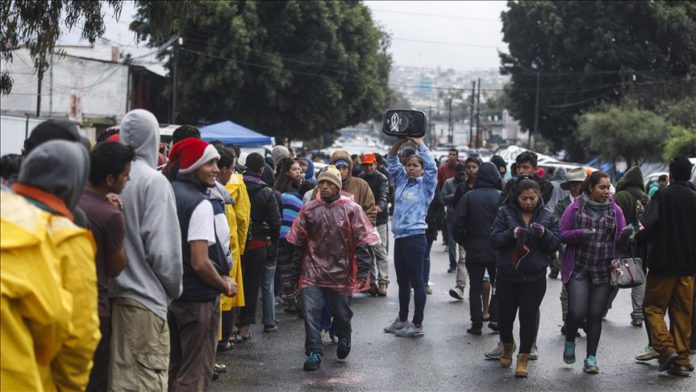 More than 700 Hondurans from a migrant caravan advancing toward the US-Mexico border have returned to the Central American nation, the National Migration Institute confirmed.

The institute said Sunday that 232 minors were among the 704 migrants who have returned in the last two days.

The largest migrant caravan amid the coronavirus outbreak with around 3,000 Hondurans entered illegally into Guatemala on Thursday.

Guatemala accused the migrants of endangering its health situation during the pandemic, saying authorities will therefore deport them.

“The order has been given to detain all those who entered illegally, and return them to the border of their country,” President Alejandro Giammattei said in an address to the nation. “We will not allow any foreigner who has used illegal means to enter the country, to think that they have the right to come and infect us and put us at serious risk.”

Mexico’s President Andres Manuel Lopez Obrador suggested last week that the migrant caravan may have a link with the forthcoming US presidential election.

“I think it has to do with the election in the United States,” Lopez Obrador said. “I don’t have all the elements, but there are indications that it formed with that purpose. I don’t know to whose benefit, but we’re not naive.”

Under US President Donald Trump, scores of migrants are grappling with the US anti-migrant policy in Central America where they begin their journey in a bid to flee violence and poverty in their home countries.

Militarization at the borders, cuts in humanitarian aid, restricted access to documents and the inoperative “safe third-country agreements” signed by the Trump administration with Central American countries make it almost impossible for a large migrant caravan to make it to the safe harbor, the US.

As part of the COVID-19 restrictions, Washington froze refugee admissions in March, which makes entering the country illegally as difficult as ever.

2 US soldiers killed in Afghanistan's south