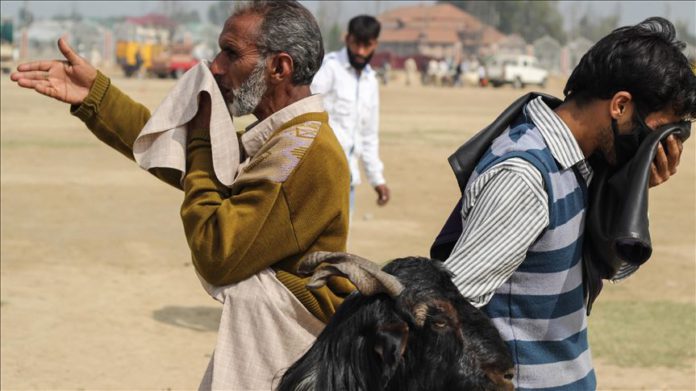 This year the Meerut district’s animal market in India’s most populous northern state of Uttar Pradesh is deserted.

With days before the Muslim festival of Eid-al-Adha, the biggest animal market in western Uttar Pradesh should be bustling with buyers and sellers.

But due to restrictions imposed by the administration in view of the COVID-19 pandemic, animal traders have suffered huge losses and Muslims are also finding it difficult to get sacrificial animals.

Farooq Khan has been selling animals in Meerut’s animal market for 10 years.

“I suffered substantial loss on eid this time. There is restriction on sale of livestock in markets as well as on big gatherings. People are secretly selling their animals at throwaway prices. I wanted a suitable price for my animals during the forthcoming festival of eid. But that is now impossible,” he told Anadolu Agency.

Eid-al-Adha, also known as Bakrid in India, will be celebrated Aug. 1 when Muslims sacrifice animals. They buy goat or other animals according to their ability and status and offer it as a sacrifice. But many will not be able to perform that religious duty this year because of the pandemic.

Jawed Qureshi, who comes every year from Rampur to sell goats in Meerut, said he used to sell goats worth about Rs 200,000 ($2,900) and earn a handsome profit, but he has not been able to sell his animals. “The traders of sacrificial animals are in deep trouble. The joy of this sacred Muslim festival is gone,” Javed told Anadolu Agency.

Animal markets have not been held in Meerut or other parts of the country. Authorities, including in the capital New Delhi, have not allowed animal markets and the sale and purchase of animals has been forbidden in most places. Government restrictions on buying and selling sacrificial animals has caused hardships to millions of sheep and goat farmers who depend on the trade as well as prospective buyers.

The Muslim community is not getting the desired goat and other animals for sacrifice. Aslam Wadood, who runs a garment shop in Bhopal in the central state of Madhya Pradesh, said “the sale of animals starts a month before eid. Animals are sold at a number of places all over Bhopal but this year animal markets have not been allowed.”

“This year I may not be able to offer animal for sacrifice as I couldn’t buy one,” he added.

Animal sacrifice is not just a ritual. Every year during eid, Muslims around the world slaughter animals to reflect Prophet Abraham’s readiness to sacrifice his son, Ismail, for the sake of Allah.

Ayaan Ali, a bank employee in Bhopal said, “In view of the rising COVID-19 cases, the government imposed a 10-day lockdown in the district from July 25 to August 3. So it is going to be a somber eid for the Muslims. These are very testing times for all of us. I am trying to purchase a goat but have not been successful so far.”

Mufti Ashraf Usmani, spokesman of the seminary, demanded that prayers be permitted in mosques with proper social distancing on Eid al-Adha. The imposition of “five persons in a mosque” rule should be lifted, said Usmani.

He also called for arrangements for the slaughter of animals and lifting of the ban on the sale of goats.

Markets and shopping malls should also remain open for the festival, said the spokesman.

As the festival will fall Saturday, Usmani said the government should shift the weekly lockdown to Tuesday and Wednesday, instead of Saturday and Sunday.

The Uttar Pradesh state government has issued guidelines on animal sacrifice in view of the pandemic and the ongoing holy Hindu month of Sawan.

There will be a ban on sacrificing animals in the open as well as transportation of the meat through non-Muslim localities.

The Director General of Police has urged Muslims to respect the sentiments of others and said in the past there have been incidents of communal tension during the sacrifice of bovine animals so special care should be taken to ensure animals considered sacred to Hindus are not sacrificed.

Ahead of parliament debate, rights groups stress need for review of...