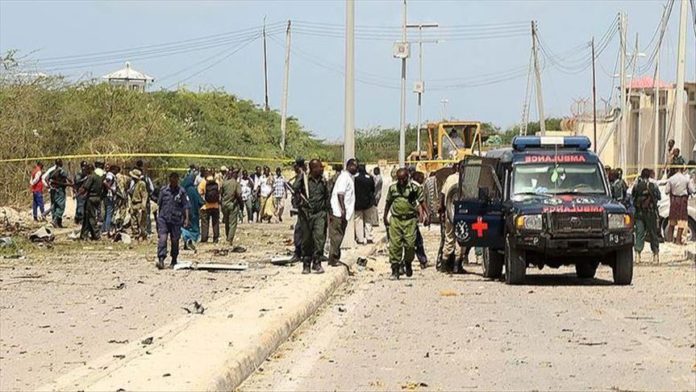 Residents of Somalia’s capital city on Wednesday remembered the nearly 600 victims of a terror attack on the third anniversary of the bombings.

At home with his family, Alas Elme sat in a white plastic chair sipping on some cold bottled water. On the left side of his face, a jagged scar arched over his eye, snaking all the way close to his ear.

Another slightly discolored scar, this one near his mouth, marked Elme’s face as he remembered the twin-bombings that shook Mogadishu on Oct. 14, 2017.

“I’ll never forget the day that I almost died due to the terror attack. I was certain I wouldn’t live to see any other day. I said a prayer and […] I was afraid of closing my eyes, but everywhere people were crying, people lay dead. Fire and smoke were everywhere,” he said in a soft voice, changed due to shards that had been lodged in his throat from the blast.

His legs broken, Elme was unable to flee and could see that he was missing some digits on his hands.

When he came to, he found himself receiving treatment from a figure in white clothes emblazoned with a crimson star and crescent. “They were shouting, trying to communicate with me. But I couldn’t hear them. They saved my life. They were the Turkish doctors who came to our aid. It was like seeing an angel. I was saved.”

On that day, Elme lost many friends. “Today, with my friends and family, we always say a prayer for them. We always pray for the Turkish doctors that flew us to a foreign land and treated us free of charge, we are grateful.”

Elme says the scars on his face serve as a brutal reminder of the surgery that saved his life.

Under heavy security on Wednesday, dozens gathered at the scene of the attack to pay their respects to those who died.

The UN and countries across the globe joined Somalia’s mourning and stood with the families affected by the attack.

While Somalia has witnessed numerous attacks over the past two decades, the Oct. 14 bombing remains the deadliest terror attack in the Horn of Africa country by al-Shabaab, which is affiliated with the al-Qaeda terror group.