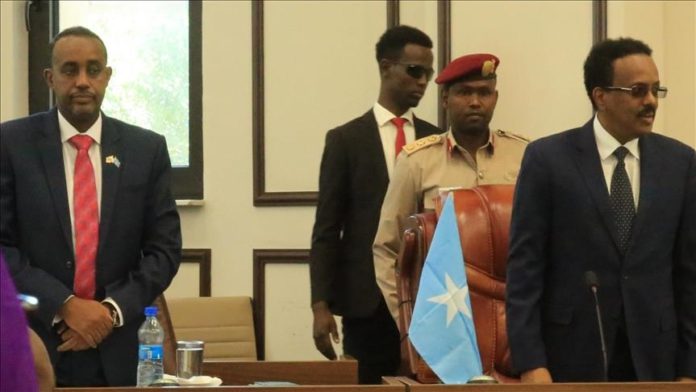 Somali President Mohamed Abdullahi Mohamed issued a decree Sunday calling for a consultative meeting to chart the direction for elections while accusing his prime minister of failing to undertake his mandate to lead the country through the polls as he was tasked.

“THAT Prime Minister has failed to undertake his mandate to lead the country through elections as per 17 September 2020 Agreement and subsequent procedures issued 1st October 2020; THEREFORE Convenes a consultative meeting involving the leadership at Federal, State and Benadir levels geared towards charting a direction for the elections and agreeing on a capable leadership to spearhead timely and transparent elections in the country. AND extends an invitation to Somali stakeholders including intellectuals, politicians and civil society for their inputs and views on electoral concerns to contribute towards coordination of elections in a peaceful and equitable environment,” the Somali presidency said in a statement.

“The statement from the President was intentionally meant to disrupt the ongoing national elections which are currently underway across the country,” Roble said.

He said the president is hell-bent on disrupting the forthcoming consultative forum between him and regional leaders.

The move is an indication of the president’s unchanged yearning to further protract the ongoing national elections for personal interest, he added.

The latest standoff emerged after the Federal Electoral Implementation Team (FEIT), Somalia’s electoral body, ousted its chairman Saturday, citing a lack of consultation, violation of electoral procedures and abandonment of neutrality among the reasons.

It also comes amid a boycott by opposition presidential candidates of some of the parliamentary elections, citing a lack of transparency, “widespread voter fraud” and wrongdoings in the election process.

It has been 14 months since Somali leaders reached an election agreement but there are very few tangible achievements to show and now a new concern of armed conflict has emerged in the country.

Meanwhile, Roble announced a reshuffle amid the political standoff between the country’s senior leaders.

*Dilan Pamuk contributed to this story from Ankara