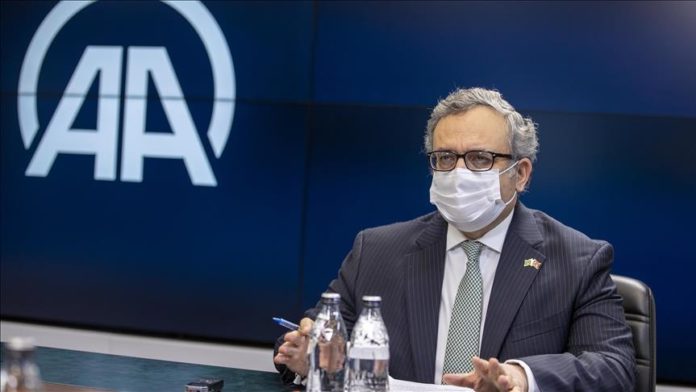 Kashmir Solidarity Day is a “reminder to India” to adhere to its promises on Kashmir and hold a plebiscite to decide its political future, the Pakistani ambassador to Turkey has said.

In an interview with Anadolu Agency, Syrus Sajjad Qazi said Kashmir is “not just close to the heart of every Pakistani, but is part of the Pakistani identity.”

Every year on Feb. 5, Pakistan, the Kashmiri diaspora, and their well-wishers hold seminars, conferences, and rallies to shore up support for the cause, he said.

Initiated by former Jamaat-e-Islami chief Qazi Hussain Ahmad in the early 1990s, the day was later declared a public holiday in Pakistan.

The Pakistani ambassador said it is on this day that “we reaffirm our solidarity with our Kashmiri brothers and sisters and to let them know that they are not alone, they are not voiceless.”

He said it is a reminder to India, and the world that they made a promise to Kashmiris, and unless and until that promise is fulfilled, the Kashmiris will not relent.

Qazi said the commitment for a plebiscite was made by none other than Jawaharlal Nehru, India’s first prime minister.

“Well, it has been 70 years and India unfortunately has dragged its feet on granting the Kashmiris their right of self-determination,” he said.

“And on this day, the Kashmiris, the Pakistanis, the Kashmiri diaspora, and the world reminds India that when you made a promise, and if you actually believe that you are a great country, and you believe that you are a democracy, then you have to abide by the principle and the prescription of the United Nations to ascertain the wishes of the Kashmiris about the future of Kashmir through the democratic process of a free and fair UN-administered plebiscite.”

The top diplomat representing Pakistan in Turkey said his country had intensified its activities and advocacy on Kashmir after India scrapped the minimal autonomy of Jammu and Kashmir on Aug. 5, 2019.

“Our missions have reached out to host communities and governments, informing and educating them about the issue,” he said. “We have taken the matter to the United Nations Security Council which held three discussions [on Kashmir] after decades.”

Qazi said Pakistani diplomatic missions have made Kashmir a part of their activities to inform parliaments, human rights organizations, and the media about what is happening.

“It’s a broad spectrum, a 360-degree effort to bring home the seriousness of the issue to everybody, because in the final analysis Kashmir is not just a problem of the Kashmiris. It is a problem of the region and the international community,” he said, explaining that the disputed region faces human rights violations, is a risk for a serious conflagration between India and Pakistan, and a call to the international community on non-fulfillment of the promises made to Kashmiris.

“So, stemming from these three motives, we have reached out to all actors to inform and update them about the situation, and underline and highlight the reason, and the need for resolving this issue,” he said. “Human rights violations anywhere should be of concern to everybody while there is a genuine risk [of war] and the world made a promise to the Kashmiris and it needs to fulfill that promise.”

Reflecting on the history of Kashmir since 1947, what he termed “history littered with black days,” Qazi said: “There was the massacre in Jammu, there was also the arrival of the Indian occupation forces in Kashmir in October 1947. So, a continued tragedy provides, unfortunately, a continuing flow of dates on which to commemorate and to highlight its various aspects.”

“And Pakistan is using all these opportunities to inform the world that something needs to be done before it is too late,” he added.

The ambassador said New Delhi deployed 900,000 troops in the Indian-administered Kashmir, a region of 10 million people — one of the most militarized zones in the world.

“Perhaps never in history, not even in the worst prison or concentration camps was such a ratio of occupied versus occupier or those confined and those confining them has been seen,” he said.

Referring to India’s abrogation of Articles 370 and 35A, which Pakistan rejected, Qazi said: “The change that was supposed to happen in Kashmir was for the Kashmiris to become silent.”

“The change that was supposed to happen in Kashmir was for the Kashmiris to finally throw up their hands and say okay: India has won. We are part of India and we are happy.

“That has not happened. And that is a tremendous achievement — all credit goes to the Kashmiris, and in part to its supporters,” the Pakistani ambassador said. “I’m convinced that eventually the struggle of the Kashmiris will reach a successful conclusion. The sooner India realizes, the sooner it will be better for the region and for India itself.”

‘Sit down and have a conversation’

The Pakistani ambassador said his country looks forward to a “third-party mediation and the prospects are very good.”

He said the best way to resolve bilateral disputes and differences is to “sit down and have a conversation.”

“Sometimes it is not possible to reach a conclusion. What civilized societies or democratic countries or democratic societies do is to then invite an uninterested, third party, as an arbitrator, as a mediator to help them resolve the dispute.

“Pakistan has always been ready,” he said. “Unfortunately, and it is very strange, India does not agree to this, partly because it knows that any neutral, objective arbitration or mediation, probably it will lose.”

“Kashmiris are not with it. International law is not with it. And the sentiments of the people of Kashmir are certainly not with it. So we are ready,” he said, terming it “very strange for a democracy to deny third party good offices, mediation, or arbitration.”

“It also shows that there is something that India wants to hide, but despite everything, it has not been able to convince the Kashmiris of the legitimacy of its own occupation.

“India’s interest is not justice in Kashmir,” Qazi said, explaining why, according to him, New Delhi does not want third-party mediation.

“India’s interest in Kashmir is to hang on to the territory by hook or crook. And mediation does not serve that purpose. We hope India will see the futility of its approach. And hopefully, ideally, it should just say that it wants to and it is ready to implement the plebiscite. But if not, at least, look towards mediation and move forward because in the end, it is the lives of 10 million Kashmiris that are at stake,” he said.

‘Expect Biden administration to be invested in Kashmir’

Reflecting on expectations from the new Joe Biden-led administration in the US, the Pakistani diplomat said “all freedom-loving and human rights conscious, responsible, and peace-loving governments should be morally, diplomatically, [and] politically invested in Kashmir.”

“It is the call to their conscience, it is the call to their actual, in fact, self-interest. It does not help the world to have a flashpoint like Kashmir between two powers which are significant in their conventional terms, but also happen to be nuclear powers,” said Qazi, referring to the cross-border air clashes between India and Pakistan in February 2019.

“All freedom-loving governments should be invested in Kashmir and should want this issue to be resolved in a manner in which human rights violations are ended. The right to self-determination by Kashmiris is upheld. And perpetual source of instability is removed from the region and from the world map,” he said.

“And Joe Biden administration, I’m sure, should be no different in terms of promoting these objectives, and we look forward to a positive movement on this.”

‘Propaganda against those who have moral courage’

Ambassador Qazi said India has “used every tool, every instrument and every means to silence Kashmiris but it has not succeeded.”

“What is the second step that a person who is committing a crime or injustice would want to do? It is to silence others who will speak up against this injustice,” he said, adding: “Pakistan and Turkey fall in that category.”

“One element of the 360-degree assault on the Kashmiris’ rights by the Indian state is a very sophisticated, very extensive, very well thought out and very well-funded campaign of disinformation,” he alleged.

“We have only seen the tip of this iceberg from the EU DisinfoLab expose,” he said, referring to an explosive report by Europe-based digital rights lab revealing a 15-year-long media and advocacy campaign against Pakistan.

“It is certainly bigger than the iceberg that sank Titanic [ship].”

“These are just indications of this hydra that has been spread all across the world to foster the Indian narrative to discredit Pakistan and to discredit all those who have the moral courage to speak about the injustices being perpetrated in illegally Indian-occupied Jammu and Kashmir.

“Turkey, unfortunately, is a valid target according to the Indian thought processes in this regard. And we have seen a spate of well-orchestrated, very well thought out deliberate distortions,” he said.

“And this is what India unfortunately is doing with regard to this nefarious campaign of discrediting Pakistan, of course, we’ve been subject to that for decades. But now, Turkey also.”