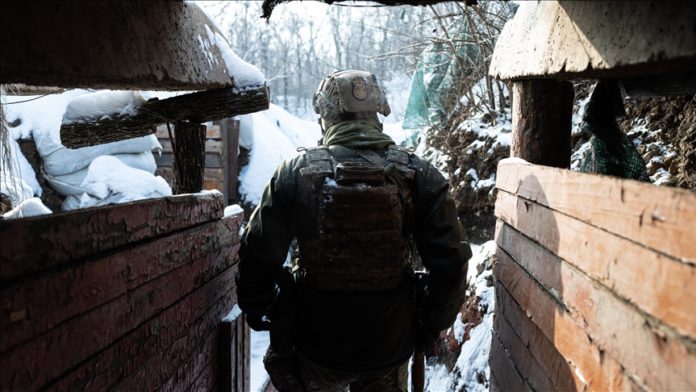 Ukrainian soldiers on the frontline can only guess what Moscow’s next move would be amid the growing Russian military buildup at the border.

The soldiers at the frontline town of Zolote in the Donbas region shared with Anadolu Agency their views on the latest developments.

Zolote has been a flashpoint since 2014 due to armed clashes between Ukrainian troops and Russian-backed separatists.

The identity of the soldiers has been withheld for security reasons.

Asked about the escalation of tensions, a Ukrainian army soldier said that Russia’s aim is to scare them, adding that he does not think that a “major attack” will take place.

“There is already a war going on for eight years, this is nothing new. Even if there will be a big attack (by Russia on Ukraine) it will be (similar to) a World War. But I don’t think they will attack,” he said.

Another frontline soldier said there will be no further escalation.

“I do not think that they (Russian side) will go further because they are not stupid and realize that the whole world can unite against them, and this is too much even for them,” he said.

Another soldier also supported the idea that Russian President Vladimir Putin “will be afraid” to attack Ukraine because “too many alliances support Ukraine.”

“The Russian white bear is angry now and could play va banque (win or lose everything),” according to another Ukrainian soldier.

One soldier said anything can be expected from Russia, recalling the 1994 attack on Chechnya.

Referring to history, a soldier said throughout the centuries “there have peace deals followed by fighting, it’s a cycle.” “If this doesn’t end through diplomacy, there will be war,” he added.

Another frontline soldier said he feels that the recent tensions are a “kind of a provocation” and that the Russian side “uses the threat and this situation to achieve their geopolitical goals.”

“But, anyway, Ukrainians are ready for any development of the situation,” he added.

Another Ukrainian soldier said that he thinks that, in general, there is a “possibility that Russia might invade Ukraine one day, but not now.”

“I just feel that Putin tries to flex his muscles, but now is not the time to attack … if he attacks he will prove to the whole world that he is an aggressor,” he said.

An attack on Ukraine could result in “a nuclear war or World War III,” a soldier said.

“This would be different from the previous World Wars because it would be the end of the world,” he said, adding that in case of invading Europe, Putin could “go to Europe … but there is NATO in Europe, they would not let it, so, probably, he would not try to go against Ukraine.”

Another soldier said that “it is impossible to guess what will happen.”

Moscow has denied that it is preparing to invade and said its troops are there for exercises. It has also issued a list of security demands, including that Ukraine does not join NATO.

Demonstrations erupted in Kyiv on Nov. 21, 2013, after then Ukrainian President Viktor Yanukovych did not sign a European Union Association Agreement that sought closer economic ties with Russia.

After Yanukovych fled the country in February 2014, demonstrations grew and pro-Russian separatists declared their so-called independence in Donetsk and Lugansk in the eastern part of the country.

According to the UN, more than 13,000 people have been killed in clashes between separatists and the Kyiv government since 2014.