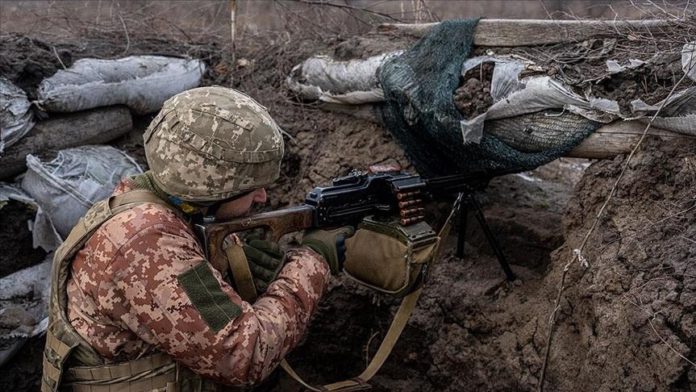 There is a tense calm in eastern Ukraine’s Donbas region, with its giant neighbor Russia just across the border, but the town of Stanytsia Luhanska looks like a ghost town, with ruined buildings, shattered windowpanes, and scattered household goods, including children’s toys.

As a possible Russian invasion of Ukraine looms ominously, Anadolu Agency traveled to a section of the front line in the conflict-ridden Donbas region, a region where tens of thousands have already died, and where Ukrainian soldiers are now girding for a worse crisis.

Since 2014, Stanytsia Luhanska has been a battleground, with clashes between the Ukrainian army and pro-Russian separatists.

The pro-Russia separatists fired mortar shots in late 2021, damaging some of the buildings and houses in the town and forcing the residents to flee to protect themselves.

For the time being, there are no clashes, and Ukrainian forces from the 79th Air Assault Brigade patrol the region on a regular basis, using binoculars to observe the separatists’ movements.

At a time when hostilities between Moscow and the West are escalating, attention is focused on events on the Ukrainian-Russian border as well as the front line.

Diplomatic efforts are ongoing to prevent the situation sparking into a war, and military deployments across the border are being closely monitored by the international community.

Protests erupted in the capital Kyiv on Nov. 21, 2013 when then-president Viktor Yanukovych opted not to sign an Association Agreement with the EU.

As the demonstrations grew larger, Yanukovych fled the country in February 2014, and pro-Russia separatists in the Donbas region’s cities of Donetsk and Luhansk declared so-called independence.

In March 2014, Russia annexed Crimea, in southern Ukraine, in a move called illegal by the EU, Turkiye, and the UN General Assembly.

Some 13,000 people, both civilian and combatants, have lost their lives in the Donbas conflict between Ukrainian forces and pro-Russian separatists since April 2014, and some 30,000 wounded, according to the United Nations Human Rights Monitoring Mission in Ukraine.