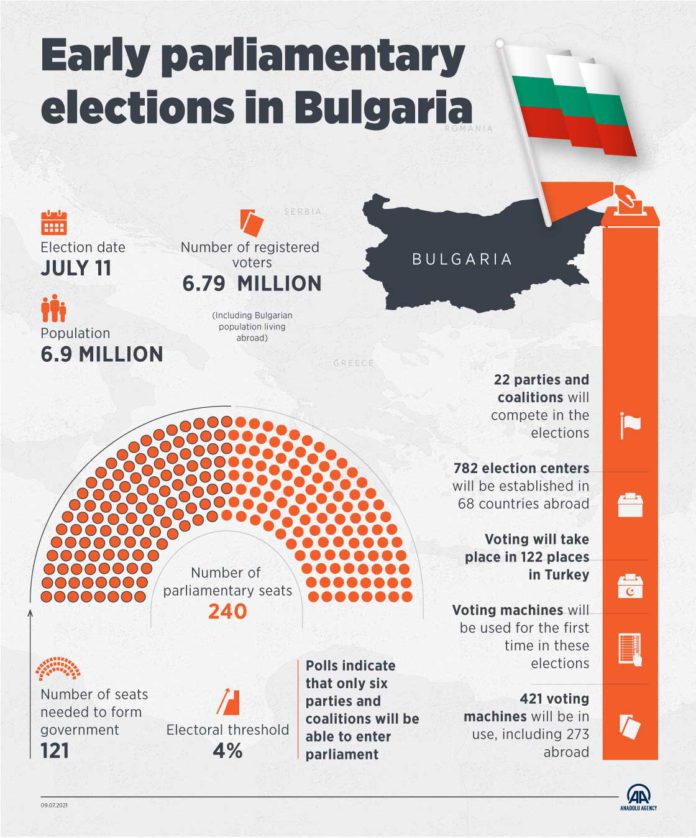 Bulgaria will hold early parliamentary elections on Sunday, the second vote in three months as political groups failed to form a government after the April 4 polls.

As many as 22 political parties and coalitions will compete for 240 seats in the unicameral National Assembly.

The main contenders in the election are a coalition between GERB and right-wing Union of Democratic Forces – led by three-time Prime Minister Boyko Borissov, and populist formation There Is Such a People headed by singer-turned-politician Slavi Trifonov.

In May, to quell the political crisis, retired general Stefan Yanev was appointed as interim prime minister.

Joining the EU in 2007, Bulgaria has been regarded as the poorest country of the union, and is often warned by the bloc over widespread corruption, lack of transparency and professionalism of state institutions and the inefficiency of the judiciary.

The members of parliament are elected for a four-year term. Polling stations will open at 7 a.m. local time (0400 GMT).

Approximately one million Turks and Muslims, roughly 10% of Bulgaria’s population, expect political stability, and to be regarded as equal citizens.

“Our children are here, they will study here and work for the benefit of this country,” Ahmed Bozov, a Bulgarian citizen of Turkish origin, told Anadolu Agency.

Zekiye Hasan, a teacher by profession, said: “As a citizen of Turkish origin, I want to be secure by having more contemporary and equal rights … we are Bulgarian citizens who love Bulgaria.”

Lutfiye Ali, who has been living in the southern Momchilgrad province of Bulgaria for 45 years, said she’s weary of the disputes in parliament.

“We are going through a tough time, let’s not become enemies. We have been living like siblings, let’s continue to do so,” she said. “Elections will pass, but the words we utter for each other will remain. Let’s not live with shame. Let there be no enmity between us.”